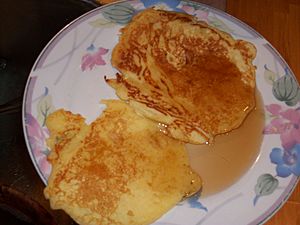 Syrup on a pancake.

Syrup is a thick, sweet, flavored liquid with a great deal of sugar in it. There are different flavored syrups, such as chocolate syrup, vanilla syrup, and maple syrup. Syrups are used to sweeten and flavor hot and cold drinks, and they are poured on desserts and breakfast foods.

Syrups are used in many different types of drinks. Coffee shops add chocolate syrup and other flavored syrups (for example: vanilla) to coffee drinks. Ice cream parlors add chocolate syrup to milk shakes. In Italy, cafés often offer a choice of different syrups that can be added to carbonated soda water, to add sweetness and flavor.

In North America, maple syrup is often poured over pancakes as a breakfast food. It is made from the sap of maple trees, which is boiled until it thickens. During the summer months, flavored syrups are also used over crushed ice to make "slush puppies" or "slush puppies".

In China, pear syrup is used to make ligaotang, a staple of Shanghainese food. It comes in many flavors, including pinenut, rose, and meat floss. It is also used as a traditional Chinese medicine to help with coughs or poor appetite.

All content from Kiddle encyclopedia articles (including the article images and facts) can be freely used under Attribution-ShareAlike license, unless stated otherwise. Cite this article:
Syrup Facts for Kids. Kiddle Encyclopedia.