For water in its liquid state see Water 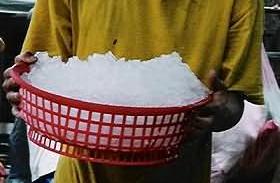 Ice in a basket 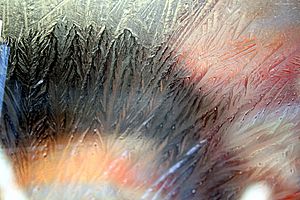 Crystals of ice on glass

Ice is the common name for frozen water. Other liquids, such as ammonia or methane or milk could be called ice when they freeze but the name would always be 'milk ice', for instance, instead of just 'ice'. Water becomes ice when it is very cold. Liquid water freezes and becomes solid ice at a temperature of 0° Celsius (32° Fahrenheit or 273 kelvin).

Ice is commonly made in a home refrigerator or freezer. If water is put in a freezer and left for a while, the water gets very cold and will freeze solid, creating ice. Water can be placed into a copper (or other metal) container to cause it freeze into ice faster. Metals are good conductors of heat, so water can freeze faster than in a plastic ice tray.

How ice is formed

Unlike other liquids, water expands as it freezes to become ice; so ice floats on water because ice has less density than water. This is very unusual - just about every other liquid gets more dense as it cools; water ice, however, is an important exception. Liquid water expands by about 9% as it becomes ice - it takes up more space. This is because the water molecules are actually farther apart instead of being closer together. The molecules in an ice crystal are arranged in a way that makes it less dense than liquid water.

If water in plumbing freezes, it can burst the water pipe. Water in glass bottles can make them explode when it freezes. Water freezing in rock cracks can expand enough to split hard rocks apart; this is an important geological weathering process that can wear down mountains and make rock into soil.

When materials are cooled their molecules vibrate less and compact together. When most materials reach a temperature called the freezing point, the molecules form a crystalline solid - although some materials (like glass and tar) do not crystallise at all but form super stiff fluids, which seem to be solid. Only Helium will not freeze; all other substances will freeze if cold enough, but fluids like cooking oil, anti-freeze, petrol (gasoline), nitrogen, etc. freeze at temperatures that most people don't experience.

Salt water needs a lower temperature to freeze than pure water. The resulting ice contains much less salt than the salt water it came from. This salty ice is not as strong as frozen pure water. Similarly spreading salt on ice melts it, if it's not too cold: the salt progressively eats into the ice, forming brine which is not cold enough to be frozen at the same temperature.

Because ice floats, even large bodies of water that freeze, like some oceans, only form ice on the surface. Most lakes never freeze to the bottom. Even the coldest oceans, like the Arctic Ocean, only freeze on the top, leaving liquid ocean circulating below. Because of this the Earth's oceans are able to redistribute heat and the climate of the earth has less extremes of heat and cold than it would otherwise. If ice were to sink instead of float, the oceans would fill up with ice from the bottom, would remain solid and only some of the top would thaw. A solid ocean would not circulate heat. But because ice floats on the surface the water beneath can continue to circulate and the ice on the surface stays exposed and readily melts when the temperature rises. Antarctica has the majority of the world's ice.

Climate change happens all the time. When it is very cold it is called an ice age. During ice ages very large areas of the earth are covered in ice, snow and glaciers. The causes of ice ages are complex, or hard to understand. Global warming is currently affecting the Earth's ice resources and its causes are also very complex.

Dry ice when put in water

There is also 'dry ice'; it is frozen carbon dioxide. Dry ice exposed to normal air gives off carbon dioxide gas that is odorless and colorless. The gas is so cold that when it mixes with air it cools the water vapour in the air to fog, which looks like a thick white smoke. It is often used in the theatre to make fake fog or smoke.

All content from Kiddle encyclopedia articles (including the article images and facts) can be freely used under Attribution-ShareAlike license, unless stated otherwise. Cite this article:
Ice Facts for Kids. Kiddle Encyclopedia.