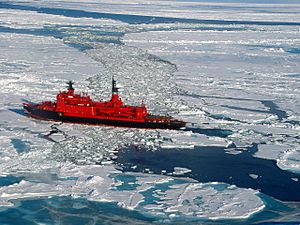 Nuclear icebreaker Yamal on her way to the North Pole, 2001 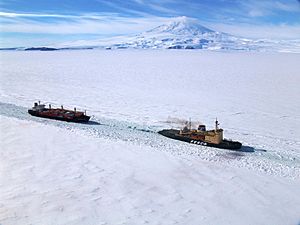 An icebreaker is a special-purpose ship or boat designed to move and navigate through ice-covered waters, and provide safe waterways for other boats and ships. Although the term usually refers to ice-breaking ships, it may also refer to smaller vessels, such as the icebreaking boats that were once used on the canals of the United Kingdom.

For a ship to be considered an icebreaker, it requires three traits most normal ships lack: a strengthened hull, an ice-clearing shape, and the power to push through sea ice.

Icebreakers clear paths by pushing straight into ice pockets. The bending strength of sea ice is so low that usually the ice breaks without noticeable change in the vessel's trim. In cases of very thick ice, an icebreaker can drive its bow onto the ice to break it under the weight of the ship. Because a buildup of broken ice in front of a ship can slow it down much more than the breaking of the ice itself, icebreakers have a specially designed hull to direct the broken ice around or under the vessel. The external components of the ship's propulsion system (propellers, propeller shafts, etc.) are at even greater risk of damage than the vessel's hull, so the ability of an icebreaker to propel itself onto the ice, break it, and clear the debris from its path successfully is essential for its safety. 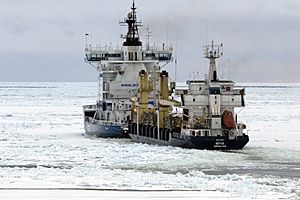 Today, most icebreakers are needed to keep trade routes open where there are either seasonal or permanent ice conditions. While the merchant vessels calling ports in these regions are strengthened for navigation in ice, they are usually not powerful enough to manage the ice by themselves. When a ship becomes immobilized by ice, the icebreaker has to free it by breaking the ice surrounding the ship and, if necessary, open a safe passage through the ice field. In difficult ice conditions, the icebreaker can also tow the weakest ships.

Some icebreakers are also used to support scientific research in the Arctic and Antarctic.

As offshore drilling moves to the Arctic seas, icebreaking vessels are needed to supply cargo and equipment to the drilling sites and protect the drillships and oil platforms from ice by performing ice management, which includes for example breaking drifting ice into smaller floes and steering icebergs away from the protected object.

All content from Kiddle encyclopedia articles (including the article images and facts) can be freely used under Attribution-ShareAlike license, unless stated otherwise. Cite this article:
Icebreaker Facts for Kids. Kiddle Encyclopedia.