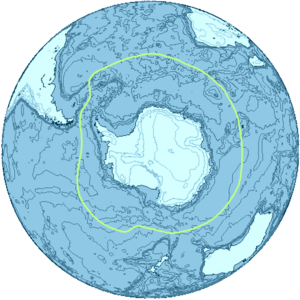 The Antarctic is the area around the Earth's South Pole. It is opposite the Arctic region which is around the North Pole. The Antarctic includes the continent of Antarctica and the ices, waters and islands in the Southern Ocean. 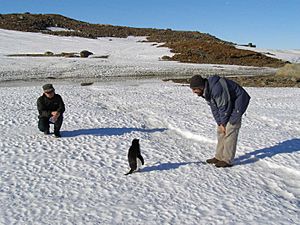 A variety of animals live in Antarctica for at least some of the year, including:

Most of the Antarctic continent is permanently covered by ice and snow, leaving less than 1 percent of the land exposed. There are only two species of flowering plant, Antarctic hair grass and Antarctic pearlwort, but a range of mosses, liverworts, lichens and macrofungi.

The Antarctic hosts the world's largest protected area comprising 1.07 million km2, the South Georgia and the South Sandwich Islands Marine Protection Area created in 2012. The latter exceeds the surface area of another vast protected territory, the Greenland National Park’s 972,000 km2. (While the Ross Sea Marine Protection Area established in 2016 is still larger at 1.55 million km2, its protection is set to expire in 35 years.)

Because Antarctica surrounds the South Pole, it is theoretically located in all time zones. For practical purposes, time zones are usually based on territorial claims or the time zone of a station's owner country or supply base.

All content from Kiddle encyclopedia articles (including the article images and facts) can be freely used under Attribution-ShareAlike license, unless stated otherwise. Cite this article:
Antarctic Facts for Kids. Kiddle Encyclopedia.