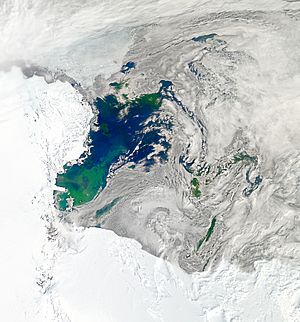 The Ross Sea is a deep bay of the Southern Ocean in Antarctica between Victoria Land and Marie Byrd Land.

All land masses in the Ross Sea are claimed by New Zealand.

The flora and fauna are similar to other southern Antarctic marine regions. In summer there are a lot of plankton. They provide food for larger species, such as fish, seals, whales, and sea- and shore-birds.

The coastal parts of the sea have a number of rookeries of Adélie and Emperor penguins. They have been seen at a number of places around the Ross Sea, both towards the coast and outwards in open sea.

The Ross Sea is one of the last parts of seas on Earth that is mostly unaffected by human activities. Because of this, it is almost totally free from pollution, overfishing and the introduction of invasive species. Some people want to make the area a world marine reserve.

All content from Kiddle encyclopedia articles (including the article images and facts) can be freely used under Attribution-ShareAlike license, unless stated otherwise. Cite this article:
Ross Sea Facts for Kids. Kiddle Encyclopedia.