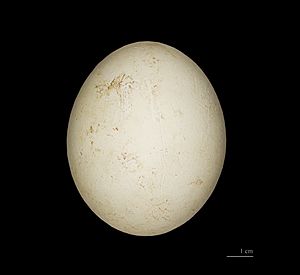 The Adélie penguin (Pygoscelis adeliae) is a Antarctic penguin that has a black head and back with a white chest and belly, and a white ring around each of their eyes. There are about 2.5 million Adélie penguins in the Southern Ocean around Antarctica. Adélie penguins travel the furthest to breed because they build their nests from stones and need to find stones. Adélies come ashore to breed in the summer. In the winter, they live on ice that floats off the Antarctic shore.

Adélie penguins are the smallest penguins in Antarctica. They weigh only about 8.5 pounds (3.9 kg), or the weight of a typical house cat. They are about 28 inches tall (2.3 ft; 71 cm).