The southern giant petrel is one of two members of the genus Macronectes, which in turn, along with 14 other genera, comprise the family Procellariidae. Macronectes, also referred to as the giant petrels, along with the genus Fulmarus, Cape petrel, Antarctic petrel, and the snow petrel form a subfamily within the larger family.

The southern giant petrel was first described as Macronectes giganteus by Johann Friedrich Gmelin, in 1789, based on a specimen from Isla de los Estados off Tierra del Fuego.

Macronectes giganteus can be broken down as makros a Greek word meaning "long" or "large" and nēktēs meaning "swimmer", and giganteus from the Latin for "gigantic". Southern giant petrel starts with southern referring to their habitat being further south than their counterpart the northern giant petrel, and petrel refers to St. Peter and from the story of him walking on water, which refers to how they run on top of the water as they are getting airborne. They were also called fulmar, which comes from full an Old Norse word meaning "foul", and mar meaning "gull". They resemble seagulls and they have the ability of spitting a foul smelling concoction at predators. 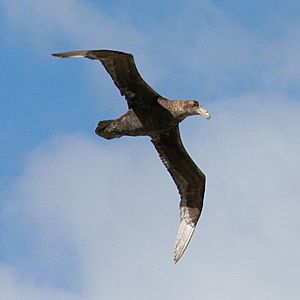 This and its sister species are the largest members of the Procellariidae. The southern giant petrel measures 86 to 99 cm (34–39 in) with a wingspan of 185 to 205 cm (73–81 in). Both this and the northern giant petrel vary considerably in size, with southern colonies averaging larger than northern colonies, in line with Bergmann's rule. Due to the large amount of size variability, it is difficult to determine which is the larger species, but the largest-bodied colonies of the southern species are slightly larger on average, in both mass and linear dimensions, than the largest in the northern giant petrel. Body mass can vary widely, from 2.3 to 5.6 kg (5.1–12.3 lb), with males averaging larger than females. The largest average weights come from Macquarie Island, where 20 males averaged 5.14 kg (11.3 lb) and 21 females averaged 4.2 kg (9.3 lb). On the South Orkney Islands, 37 males averaged 4.94 kg (10.9 lb) and 37 females averaged 3.85 kg (8.5 lb). In contrast, in Patagonia, 15 males averaged 3.5 kg (7.7 lb) and 21 females averaged 2.5 kg (5.5 lb). However another study from Patagonia, found that 26 males averaged 4.2 kg (9.3 lb) and 27 females averaged 3.7 kg (8.2 lb). They have a very large yellow bill, with a green tip and greyish-brown legs. There are two different morphs, the dark which resembles the northern giant petrel, and the more distinct light morph. On the dark morph the upper breast, head and neck are light with the remainder of its plumage being mottled brown. The leading edge of its wing is lighter as is the base of the inner primaries, on the underside. The light morph is rarer and very distinct with only slight black speckles on an otherwise all white look. As juveniles, the dark morph starts off more sooty brown and pales as it ages. Both giant petrels have strong legs and can move around on land effectively. Finally, when in flight this species has a somewhat hunchbacked appearance.

It, like all members of the Procellariiformes, have features that set them apart from other birds. First, they have nasal passages called naricorns, that attach to the upper bill. The nose holes on the petrels are on the top of the bill. The bills of all Procellariiformes are also unique in that they are split into between seven and nine horny plates. They produce a stomach oil made up of wax esters and triglycerides that is stored in the proventriculus. This can be sprayed out of their mouths as a defence against predators and used as an energy rich food source for chicks and for the adults during their long flights. They have above the nasal passage a salt gland, which helps to remove salt from their blood; this salt, primarily sodium chloride, is in their marine invertebrate food and in the large amount of ocean water that they imbibe; it excretes a concentrated salt solution from the nostrils. 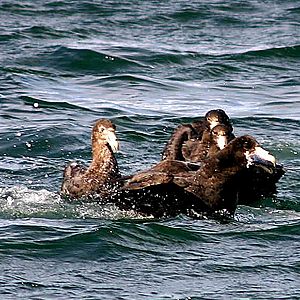 The southern giant petrel achieves sexual maturity at six or seven years of age; however the average age of first breeding is ten years. Its breeding season begins in October. Its nest is a mound of moss, grass, and stones with a depression in the centre and is located on bare or grassy ground. They form loose colonies except in the Falkland Islands where the colonies are much larger. 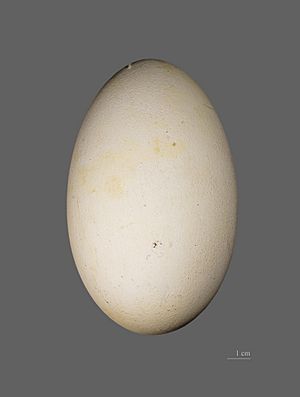 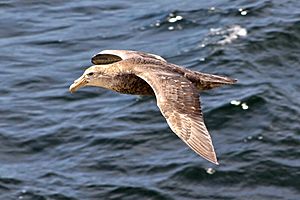 This petrel will feed on fish, krill, squid, offal and waste from vessels in coastal and pelagic waters, where they often follow fishing boats and cruise ships. Unlike most other Procellariiformes, this bird will eat carrion. The Southern Giant petrel is an extremely aggressive predator and will kill other seabirds (usually penguin chicks, sick or injured adult penguins and the chicks of other seabirds). It has been seen preying on the adult Australasian gannet by holding it underwater and drowning it. These birds have also been observed drowning yellow-nosed and black-browed albatrosses. The males exclude females from the carcasses that they are feeding on.

The range of this bird is quite large as it ranges from Antarctica to the subtropics of Chile, Africa, and Australia, and has an occurrence range of 36,000,000 km2 (14,000,000 sq mi). It breeds on numerous islands throughout the southern oceans. The islands with larger populations include the Falkland Islands, South Georgia, South Orkney Islands, Staten Island, South Shetland, Heard Island, Macquarie Island, the Prince Edward Islands, and the Crozet Islands. The other locations with small populations are the Kerguelen Islands, Gough Island, Tristan da Cunha, Diego Ramirez, Isla Noir as well as four locations on the continent of Antarctica, including Terre Adélie, and small islands off the coast of Argentina near Chubut Province. The colonies are visited year round.

The chicks are vulnerable to introduced mammalian predators like small rodents. These are generally not recognized as threats by the members of a colony, and thus can kill all the chicks in a colony.

2009 was a good year for this species as it was upgraded to a status of least concern from near threatened, by the IUCN. This downgrade was due to a clearer picture and more accurate censuses. Overall population trends show that in the 1980s there were 38,000 pairs which dropped to 31,000 in the late 1990s followed by 46,800 presently. The Falkland Islands and most of the South Georgia Archipelago have shown increases from the 1980s to the present. Terre Adélie has shown a drastic reduction as the count fell to 10—15 pairs from 80 pairs in the 1980s. The official 10/3 generation trend is listed by BirdLife International at a 1%—9% decline, but it is stated that this is a conservative number. They elaborate that a best case scenario puts it at a 17% increase and a worst-case scenario of a 7.2% reduction.

Major threats to the well-being of this species start with the typical accidental deaths caused by longline fishing as well as trawl fishing near the Falkland Islands. Between 2,000 and 4,000 were killed in 1997—1998 due to illegal longline fishing. Also the number of southern elephant seals, which is an important source of food as carrion, has been shrinking. Human disturbances have also adversely affected this bird.

To assist in this bird's continued survival it was placed in CMS Appendix II and ACAP Annex I. Many of the islands that it breeds on are nature reserves, and Gough Island and Macquarie Island are World Heritage Sites. Monitoring is done on South Georgia, Marion Island, the Crozet Islands, Terre Adélie, and Macquarie Island. Gough Island has had two censuses in the last decade.

Continued monitoring and surveys at major breeding sites have been proposed, as well as researching movement and migration. Finally, continued promotion of "best-practice mitigation measures" via existing methods outlined in CCAMLR, CMS, and FAO.

All content from Kiddle encyclopedia articles (including the article images and facts) can be freely used under Attribution-ShareAlike license, unless stated otherwise. Cite this article:
Southern giant petrel Facts for Kids. Kiddle Encyclopedia.