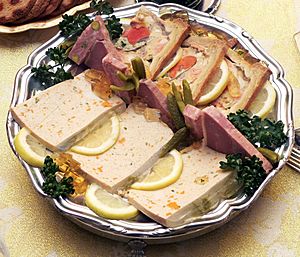 A variety of pâtés on a platter 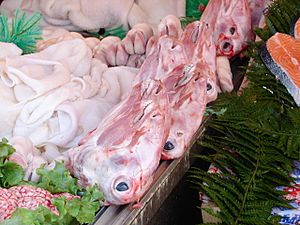 Animal heads, brains, trotters and tripe on sale in an Istanbul meat market

Offal, also called variety meats, pluck or organ meats, refers to the internal organs and entrails of a butchered animal. The word does not refer to a particular list of edible organs, which varies by culture and region, but includes most internal organs excluding muscle and bone. As an English mass noun, the term "offal" has no plural form. Some cultures strongly consider offal as food to be taboo, while others use it as everyday food, or in delicacies. Certain offal dishes—including foie gras, pâté and sweetbread—are considered gourmet food in international cuisine. Others remain part of traditional regional cuisine and may be consumed especially in connection with holidays. This includes Scottish haggis, Jewish chopped liver, U.S. chitterlings, Mexican menudo as well as many other dishes. Intestines are traditionally used as casing for sausages.

Depending on the context, offal may refer to those parts of an animal carcass discarded after butchering or skinning; it may also refer to the by-products of milled grains, such as corn or wheat. Offal not used directly for human or animal food is often processed in a rendering plant, producing material that is used for fertilizer or fuel; or in some cases, it may be added to commercially produced pet food

All content from Kiddle encyclopedia articles (including the article images and facts) can be freely used under Attribution-ShareAlike license, unless stated otherwise. Cite this article:
Offal Facts for Kids. Kiddle Encyclopedia.