Satay (/ˈsæteɪ/ SA-tay, /ˈsɑːteɪ/ SAH-tay), or sate in Indonesian spelling, is a Indonesian dish of seasoned, skewered and grilled meat, served with a sauce. It is a dish from Indonesia, and popular in Malaysia, Singapore, Thailand, and Brunei. Satay may consist of diced or sliced chicken, goat, mutton, beef, pork, fish, other meats, or tofu; the more authentic version uses skewers from the midrib of the coconut palm frond, although bamboo skewers are often used. These are grilled or barbecued over a wood or charcoal fire, then served with various spicy seasonings. Satay can be served in various sauces, however most often they are served in a combination of soy and peanut sauce. Hence, peanut sauce is often called satay sauce.

Satay originated on the Indonesian island of Java. It is available almost anywhere in Indonesia, where it has become a national dish. It is also popular in many other Southeast Asian countries including Thailand, Malaysia, Singapore and Vietnam. A key feature of Thai satay is the inclusion of pork as a meat option, and Thai-style peanut sauce. Meanwhile, Indonesian satay is often served with kecap manis – a sweet soy sauce, and is often accompanied with lontong, a type of rice cake. In Sri Lanka, it has become a staple of the local diet as a result of the influences from the local Malay community.

Satay is a popular delicacy in Indonesia. The country's diversity (see Indonesian cuisine) has produced a wide variety of satays. In Indonesia, satay is a popular street food, it can be obtained from a travelling satay vendor, from a street-side tent-restaurant, in an upper-class restaurant, or at traditional celebration feasts.

Close analogues are yakitori from Japan, kǎoròu chuàn from China, shish kebab from Turkey and the Middle East, shashlik from the Caucasus, and sosatie from South Africa. It is listed at number 14 on World's 50 most delicious foods readers' poll compiled by CNN Go in 2011.

Although both Thailand and Malaysia claim it as their own, its Southeast Asian origin was in Java, Indonesia. There satay was developed from the Indian kebab brought by the Muslim traders. Even India cannot claim its origin, for there it was a legacy of Middle Eastern influence.

Encyclopaedia of Chinese and Oriental Cookery 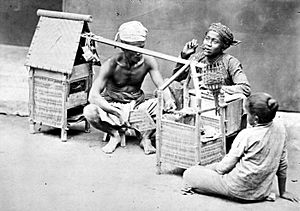 Satay seller in Java, c. 1870. Note the ketupat hanging behind the vendor.

Contemporary scholars say that the English word "satay" is derived from Indonesian: sate, and Malay: saté or satai, both perhaps of Tamil origin, and that satay was developed by Javanese street vendors as an adaptation of Indian kebabs. The introduction of satay, and other now-iconic dishes such as tongseng and gulai kambing based on meats such as goat and lamb, coincided with an influx of Indian and Arab traders and immigrants starting in the 18th century.

From Java, satay spread through the Malay Archipelago and, as a consequence, numerous variations of the dish have been developed. By the late-19th century, satay had crossed the Strait of Malacca into neighbouring Malaysia, Singapore, and Thailand. In the 19th century, the term migrated, presumably with Malay immigrants from the Dutch East Indies, to South Africa, where it is known as sosatie. The Indo Dutch people took this dish, as well as many other Indonesian specialties, to the Netherlands, thereby influencing Dutch cuisine. 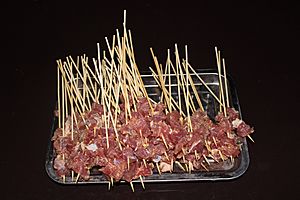 Meat commonly used includes chicken, lamb, goat, mutton, beef, venison and rabbit; seafoods such as fish, shrimp and squid; or offal such as liver, intestine and tripe. Some have also used more exotic varieties of meat, such as turtle, crocodile, horse, lizard and snake meat. Most of the time, the meat is cut into small cubes shape, about thumb-size. However, such recipes as Ponorogo use chicken fillet cut into an elongated finger-like shape, thus one skewer holds only one piece.

The skewers used for chicken satay are traditionally made from lidi, a midrib of coconut fronds. Bamboo skewers might be used instead. For firmer meats, such as lamb, goat, and beef, a thicker bamboo skewer is used. The skewers are usually soaked in water before using to avoid burning during grilling. Each skewer usually holds four pieces of meat, some only three pieces. A goat meat satay might insert a cube of fat between meat cubes. Turmeric is required to marinate satay to give the dish its characteristic yellow colour. Another popular marinade is sweet soy sauce mixed with coconut oil or palm margarine. The skewered meat is seasoned, marinated, and then grilled on charcoal embers.

Satay may be served with a spicy peanut sauce dip, or peanut gravy, served with slices of lontong or ketupat (rice cakes), and accompanied by acar (pickles) consisting of slivers of onions, carrots and cucumbers in vinegar, salt, and sugar solution. Mutton satay is usually served with kecap manis (sweet soy sauce) instead of peanut sauce. Pork satay can be served in a pineapple-based satay sauce or cucumber relish. An Indonesian version uses a soy sauce-based dip.

Variants and outlets of note 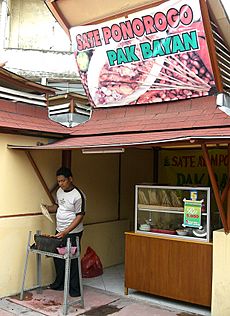 Sate Ponorogo being grilled in a foodstall in Surabaya, East Java, Indonesia

Indonesia is the home of satay (known as sate in Indonesian and pronounced similar to the English "satay"), and satay is a widely renowned dish in almost all regions of Indonesia; it is considered the national dish and one of Indonesia's best dishes. Satays, in particular, are a staple in Indonesian cuisine, served everywhere from street carts to fine dining establishments, as well as in homes and at public gatherings. As a result, many variations have been developed throughout the Indonesian Archipelago.

In Indonesia there are some restaurants that specialised on serving various kinds of satay and present it as their speciality, such as Sate Ponorogo Restaurant, Sate Blora Restaurant, and also chains of Sate Khas Senayan restaurants, previously known as Satay House Senayan. In Bandung, the West Java Governor's office is popularly called Gedung Sate (Indonesian: Satay building) to refer the satay-like pinnacle on its roof.

Indonesia has the richest variations of satay in the world. The satay variants in Indonesia usually named after the region its originated, the meats, parts or ingredients its uses, also might named after the process or method of cooking. 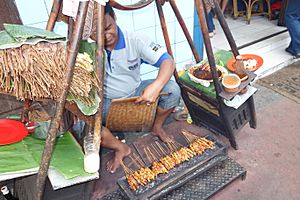 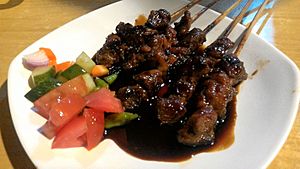 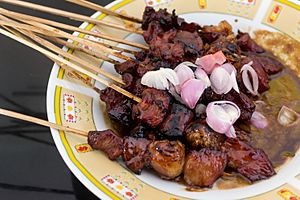 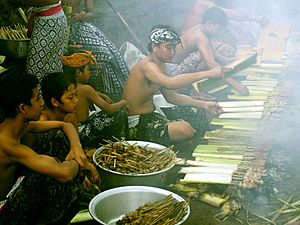 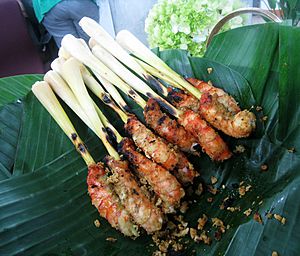 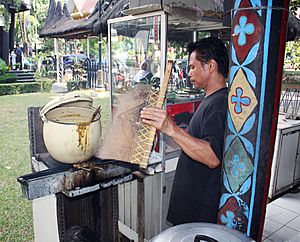 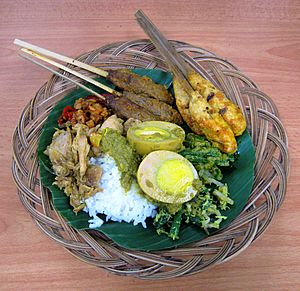 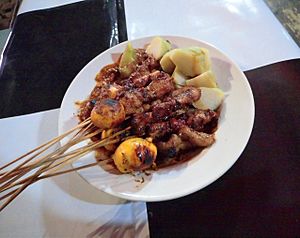 All content from Kiddle encyclopedia articles (including the article images and facts) can be freely used under Attribution-ShareAlike license, unless stated otherwise. Cite this article:
Satay Facts for Kids. Kiddle Encyclopedia.