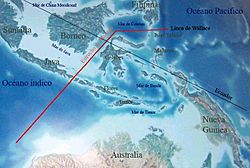 Wallace's Line; Bali and Lombok, unmarked, are to the south-west end

The Malay Archipelago refers to the archipelago between mainland Southeastern Asia and Australia.

The archipelago is between the Indian and Pacific Oceans. The group has over 25,000 islands. It is the largest archipelago by area, and third by number of islands in the world. It includes Indonesia, the Philippines, Singapore, Brunei, East Malaysia and East Timor.

The Malay Archipelago is the place where two large tectonic plates meet, and is an area where orogeny (mountains) and volcanoes are common.

The Wallace Line is a key term in biogeography. It passes between Bali and Lombok, which are separated by a passage of water which is both deep and fast. On the one side are Australasian species, and on the other side Asian species. The natural history of the area was investigated by Alfred Russel Wallace, who spent eight years in the Spice Islands.

"In this archipelago there are two distinct faunas rigidly circumscribed, which differ as much as do those of Africa and South America... yet there is nothing on the map or on the face of the islands to mark their limits. The boundary line passes between islands closer together than others belonging to the same group. I believe the western part to be a separated portion of continental Asia, while the eastern is a fragmentary prolongation of a former west Pacific continent".

All content from Kiddle encyclopedia articles (including the article images and facts) can be freely used under Attribution-ShareAlike license, unless stated otherwise. Cite this article:
Malay Archipelago Facts for Kids. Kiddle Encyclopedia.