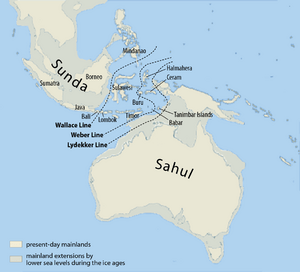 Wallace's line delineates Australian and Southeast Asian fauna. The land in the last ice age when the sea level was more over 100 m lower than today, is shown in grey.

The Wallace Line (or 'Wallace's Line') is a boundary that separates the ecozone of Asia and the Australasian ecozone. The transitional zone is sometimes called Wallacea.

The line runs through Indonesia, between Borneo and Sulawesi (Celebes); and through the Lombok Strait between Bali (in the west) and Lombok (in the east).

The distance between Bali and Lombok is only about 35 kilometers. Surprisingly, the distributions of many bird species observe the line, because many birds do not cross even the smallest stretches of open ocean water. Some bats have distributions that cross the Wallace Line, but other mammals are generally limited to one side or the other; an exception is the Crab-eating Macaque. Other groups of plants and animals show differing patterns, but the overall pattern is striking and reasonably consistent.

The root cause of Wallace's line is that the ancient supercontinent Gondwana was separated entirely from other parts of the world after Pangaea broke up. Australasia and its smaller islands were part of Gondwana, and that is why their fauna is so different from that of south-east Asia. Wallace's line marks where part of the old Gondwana plate touches part of the old Laurasia plate.

During Quaternary ice age cold periods, when the ocean levels were up to 120 m lower, both Asia and Australia were joined with their respective islands. The deep water between those two large continental shelf areas was — for over 50 million years — a barrier that kept the flora and fauna of Australia separated from that of Asia. Wallacea consists of islands that were never recently connected by dry land to either of the continental land masses, and thus was populated by organisms capable of crossing the straits between islands. 'Weber's Line' runs through this area (rather to the east of centre), at the tipping point between dominance by species of Asian vs. species of Australian origin.

All content from Kiddle encyclopedia articles (including the article images and facts) can be freely used under Attribution-ShareAlike license, unless stated otherwise. Cite this article:
Wallace Line Facts for Kids. Kiddle Encyclopedia.