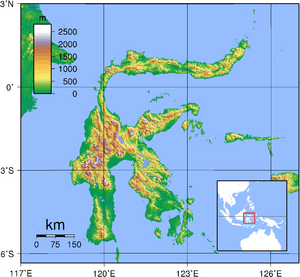 Sulawesi also known as Celebes, is one of the four Greater Sunda Islands. It is governed by Indonesia. The world's eleventh-largest island, it is situated east of Borneo, west of the Maluku Islands, and south of Mindanao and the Sulu Archipelago. Within Indonesia, only Sumatra, Borneo and Papua are larger in territory, and only Java and Sumatra have larger populations.

Sulawesi is the world's eleventh-largest island, covering an area of 174,600 km2. The island is surrounded by Borneo to the west, by the Philippines to the north, by Maluku to the east, and by Flores and Timor to the south. It has a distinctive shape, dominated by four large peninsulas: the Semenanjung Minahassa; the East Peninsula; the South Peninsula; and the South-east Peninsula. The central part of the island is ruggedly mountainous, such that the island's peninsulas have traditionally been remote from each other, with better connections by sea than by road. 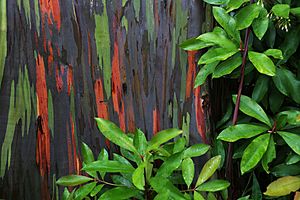 The colorful bark of Eucalyptus deglupta

Sulawesi is part of Wallacea, meaning that it has a mix of both Indomalayan and Australasian species that reached the island by crossing deep-water oceanic barriers. The flora includes one native eucalypt, E. deglupta. There are 8 national parks on the island, of which 4 are mostly marine. The parks with the largest terrestrial area are Bogani Nani Wartabone with 2,871 km2 and Lore Lindu National Park with 2,290 km2. Bunaken National Park, which protects a rich coral ecosystem, has been proposed as an UNESCO World Heritage Site.

Early in the Pleistocene, Sulawesi had a dwarf elephant and a dwarf form of Stegodon, (an elephant relative, S. sompoensis); later both were replaced by larger forms. A giant suid, Celebochoerus, was also formerly present. It is thought that many of the migrants to Sulawesi arrived via the Philippines, while Sulawesi in turn served as a way station for migrants to Flores. A Pleistocene faunal turnover is recognised, with the competitive displacement of several indigenous tarsiers by more recently arriving ones and by Celebochoerus by other medium-sized herbivores like the babirusa, anoa and Celebes warty pig. 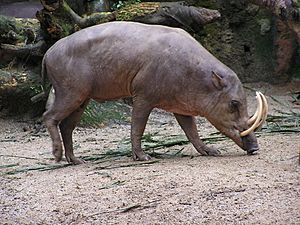 The north Sulawesi babirusa is endemic to Sulawesi.

There are 127 known extant native mammalian species in Sulawesi. A large percentage, 62% (79 species) are endemic, meaning that they are found nowhere else in the world. The largest of these are the two species of anoa or dwarf buffalo. Other artiodactyl species inhabiting Sulawesi are the warty pig and the babirusas, which are aberrant pigs. The only native carnivoran is the Sulawesi palm civet (Asian palm and Malayan civets have been introduced). Primates present include a number of nocturnal tarsiers (T. fuscus, Dian's, Gursky's, Jatna's, Wallace's, the Lariang and pygmy tarsiers) as well as diurnal macaques (Heck's, the booted, crested black, Gorontalo, moor, and Tonkean macaques). While most of Sulawesi's mammals are placental and have Asian relatives, several species of cuscus, arboreal marsupials of Australasian origin, are also present (Ailurops ursinus and Strigocuscus celebensis, which are diurnal and nocturnal, respectively).

Several endemic shrews, the Sulawesi shrew, Sulawesi tiny shrew and the Sulawesi white-handed shrew, are found on the island. 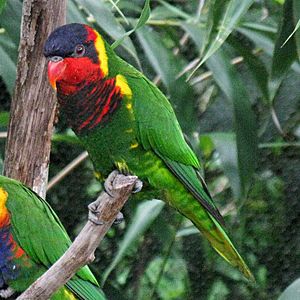 By contrast, Sulawesian bird species tend to be found on other nearby islands as well, such as Borneo; 31% of Sulawesi's birds are found nowhere else. One endemic (also found on small neighboring islands) is the largely ground-dwelling, chicken-sized maleo, a megapode which sometimes uses hot sand close to the island's volcanic vents to incubate its eggs. An international partnership of conservationists, donors, and local people have formed the Alliance for Tompotika Conservation, in an effort to raise awareness and protect the nesting grounds of these birds on the central-eastern arm of the island. Other endemic birds include the flightless snoring rail, the fiery-browed starling, the Sulawesi masked owl, the Sulawesi myna, the satanic nightjar and the grosbeak starling. There are around 350 known bird species in Sulawesi.

The larger reptiles of Sulawesi are not endemic and include reticulated and Burmese pythons, king cobras, water monitors, sailfin lizards, saltwater crocodiles and green sea turtles. An extinct giant tortoise, Megalochelys atlas, was formerly present, but disappeared by 840,000 years ago, possibly because of the arrival of humans. Similarly, komodo dragons or similar lizards appear to have inhabited the island, being among its apex predators. The smaller snakes of Sulawesi include endemic forms such as Calamaria boesemani, Calamaria muelleri, Calamaria nuchalis, Cyclotyphlops, Enhydris matannensis, Ptyas dipsas, Rabdion grovesi, Tropidolaemus laticinctus and Typhlops conradi. Similarly, the smaller lizards of Sulawesi include nonendemic species such as Bronchocela jubata, Dibamus novaeguineae and Gekko smithii, as well as endemic species such as Lipinia infralineolata and Gekko iskandari. 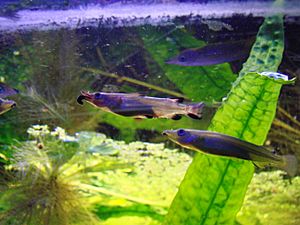 Sulawesi is home to more than 70 freshwater fish species, including more than 55 endemics. Among these are the genus Nomorhamphus, a species flock of viviparous halfbeaks containing 12 species that only are found on Sulawesi (others are from the Philippines). In addition to Nomorhamphus, the majority of Sulawesi's freshwater fish species are ricefishes, gobies (Glossogobius and Mugilogobius) and Telmatherinid sail-fin silversides. The last family is almost entirely restricted to Sulawesi, especially the Malili Lake system, consisting of Matano and Towuti, and the small Lontoa (Wawantoa), Mahalona and Masapi. Another unusual endemic is Lagusia micracanthus from rivers in South Sulawesi, which is the sole member of its genus and among the smallest grunters. The gudgeon Bostrychus microphthalmus from the Maros Karst is the only described species of cave-adapted fish from Sulawesi, but an apparently undescribed species from the same region and genus also exists. 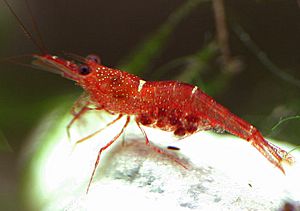 Many species of Caridina freshwater shrimp and parathelphusid freshwater crabs (Migmathelphusa, Nautilothelphusa, Parathelphusa, Sundathelphusa and Syntripsa) are endemic to Sulawesi. Several of these species have become very popular in the aquarium hobby, and since most are restricted to a single lake system, they are potentially vulnerable to habitat loss and overexploitation. There are also several endemic cave-adapted shrimp and crabs, especially in the Maros Karst. This includes Cancrocaeca xenomorpha, which has been called the "most highly cave-adapted species of crab known in the world".

The genus Tylomelania of freshwater snails is also endemic to Sulawesi, with the majority of the species restricted to Lake Poso and the Malili Lake system.

The Indonesian coelacanth and the mimic octopus are present in the waters off Sulawesi's coast.

All content from Kiddle encyclopedia articles (including the article images and facts) can be freely used under Attribution-ShareAlike license, unless stated otherwise. Cite this article:
Sulawesi Facts for Kids. Kiddle Encyclopedia.