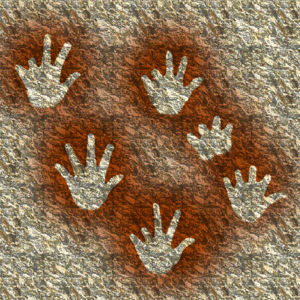 Cave paintings are paintings on cave walls and ceilings. Usually these paintings were made in prehistoric times. Most cave paintings date from 10,000 to 20,000 years ago. The oldest are from about 32,000 years ago, but scientists still disagree if this dating is correct.

It is not known why these paintings were made. Most people think they may have had a function for rituals. They may also have been a way to transit information; to tell other people about something. Most paintings are in caves that are difficult to access. These caves usually also do not show signs that people lived there all year round.

Today, there are about 350 caves known which have paintings in them. Many are in France and Spain. The best known are probably the caves of Altamira (in Spain), Lascaux (in France), or Creswell Crags in England. Sometimes, paintings were also done on cliff faces. Fewer of those have survived though, because of erosion. One such example are the rock paintings of Astuvansalmi (in Finland).

Most often, animals or hunting scenes were painted. Sometimes hands are there too. Rarely, there are also more abstract patterns.

The paintings were drawn with red and yellow ochre, hematite, manganese oxide and charcoal. Sometimes the silhouette of the animal was put into the rock first.

André Leroi-Gourhan (1911-1986) has classified the paintings into different styles:

There are different theories, what could have led people to paint in caves. The most common explanations are given below:

All content from Kiddle encyclopedia articles (including the article images and facts) can be freely used under Attribution-ShareAlike license, unless stated otherwise. Cite this article:
Cave painting Facts for Kids. Kiddle Encyclopedia.