Creswell Crags is a limestone gorge on the border between Derbyshire and Nottinghamshire, England. It is near the villages of Creswell and Whitwell.

The cliffs in the ravine have several caves. The caves were occupied during the last ice age, between around 43,000 and 10,000 years ago. They have the northernmost cave art in Europe. The evidence of occupation is found in the rich series of sediments that accumulated over many thousands of years. It is internationally unique in showing how prehistoric people lived at the extreme northernmost limits of their territory in the later Pleistocene Ice Age.

The caves have layers with flint tools from the Mousterian, and later cultures. They were seasonally occupied by nomadic groups of people during the Upper Palaeolithic and Mesolithic periods. Evidence of Neolithic, Bronze Age, Roman and post-medieval activity has also been found there. There is evidence of Neanderthal occupation 50,000–60,000 years ago, a brief Gravettian occupation around 32,000 years ago and use of all the main caves during the Magdalenian around 14,000 years ago. The site is open to the public and has a visitor centre with a small museum of objects.

Creswell Crags has been designated as a Site of Special Scientific Interest (SSSI). It has also been put forward as a potential World Heritage Site.

The most occupied caves were: 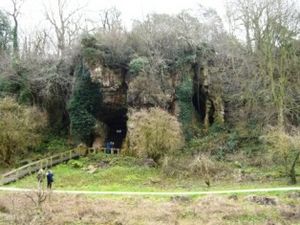 All content from Kiddle encyclopedia articles (including the article images and facts) can be freely used under Attribution-ShareAlike license, unless stated otherwise. Cite this article:
Creswell Crags Facts for Kids. Kiddle Encyclopedia.