The Arctic hare (Lepus arcticus) is a social animal that lives in the frigid tundra of North America, Newfoundland, and Greenland.

These hares often congregate in groups of up to 200 individuals.

They hop at great speeds on their large, powerful hind legs, in a kangaroo-like fashion.

The young are born open-eyed and furry. Most hares live for about a year in the wild. 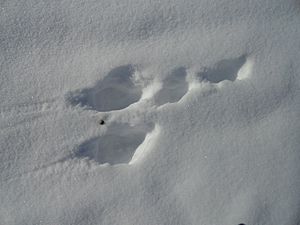 The Arctic hare is a herbivore, and specifically a folivore. Arctic hares feed primarily on woody plants, and willow constitutes 95 percent of their diet year-round. Arctic hares predominantly consume such as saxifrage, crowberry, and dwarf willow, but can also eat a variety of other foods, including lichens and mosses, blooms, other species' leaves, twigs and roots, mountain sorrel and macroalgae (seaweed). Arctic hare diets are more diverse in summer, but still primarily consists of willow, dryas and grasses. Arctic hare have been reported to occasionally eat meat, including fish and the stomach contents of eviscerated caribou. They eat snow to get water.

Female hares can have up to eight baby hares called leverets. The leverets stay within the mother's home range until they are old enough to survive on their own.

There is little information on the lifespan of Arctic hare. Some anecdotal evidence suggests they live three to five years in the wild. Arctic hare do not survive well in captivity, living only a year and a half at most.

The Arctic wolf is probably the most successful predator of the Arctic hare, and even young wolves in their first autumn can catch adult hares. Arctic foxes and ermines, which are smaller, typically prey on young hares. Gyrfalcon carry hares to their nests, cutting them in half first; gyrfalcons use hare bones and feet in the structure of their nests on Ellesmere Island, Nunavut. Peregrine falcons (Falco peregrinus) also prey on Arctic hares in the southern end of the hares' range. The Snowy owls mainly targets young hare; the French common name of the species derives from Anglo-Saxon harfang ("hare-catcher").

The Arctic hare is distributed over the northernmost regions of Greenland, the Canadian Arctic islands and Northern Canada, including Ellesmere Island, and further south in Labrador and Newfoundland. The Arctic hare is well-adapted to the conditions found in the tundras, plateaus and treeless coasts of this region, including cold weather and frozen precipitation. The Arctic hare may be found at elevations between 0 (sea level) and 900 m.

In Newfoundland and southern Labrador, the Arctic hare changes its coat colour, moulting and growing new fur, from brown or grey in the summer to white in the winter, like some other Arctic animals including ermine and ptarmigan, enabling it to remain camouflaged as their environments change. However, the Arctic hares in the far north of Canada, where summer is very short, remain white all year round.

All content from Kiddle encyclopedia articles (including the article images and facts) can be freely used under Attribution-ShareAlike license, unless stated otherwise. Cite this article:
Arctic hare Facts for Kids. Kiddle Encyclopedia.