The peregrine falcon (Falco peregrinus) is a cosmopolitan bird of prey in the family Falconidae. It can also be known just as the peregrine, and was once called the "Duck hawk" in North America. In Pakistan it is officially the military iconic symbol of the PAF and the unofficial territory bird of Gilgit-Baltistan.

The peregrine is a crow-sized falcon, with a blue-grey back, barred white underparts, and a black head and "moustache". It can go at up to 322 km/h (200 mph) in a dive, which means it is the fastest animal in the world. As with other bird-eating raptors, the female is bigger than the male. There are 17–19 subspecies recorded, and each varies slightly in appearance and where they live. There is disagreement over whether the distinctive Barbary falcon is a subspecies of the Peregrine or just a different species.

The use of certain pesticides, especially DDT was not good for the birds. In areas where DDT was used, the thickness of the shells of their eggs was reduced. This caused a dramatic decline in their numbers, in certain countries. Since the use of DDT has been forbidden in many countries, their numbers are increasing again. This recovery was helped because their nesting places were protected in many countries; some countries also bred these falcons in captivity and released them into the wild. 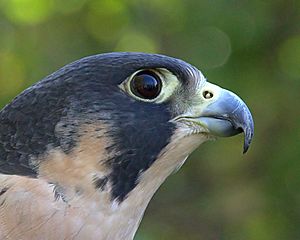 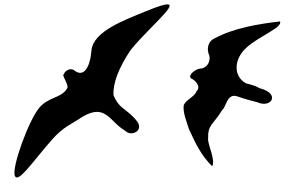 The peregrine falcon lives mostly along mountain ranges, river valleys, coastlines, and increasingly in cities. In mild-winter regions, it is usually a permanent resident, and some individuals, especially adult males, will remain on the breeding territory. Only populations that breed in Arctic climates typically migrate great distances during the northern winter.

The peregrine falcon reaches faster speeds than any other animal on the planet when performing the stoop, which involves soaring to a great height and then diving steeply at speeds of over 320 km/h (200 mph), hitting one wing of its prey so as not to harm itself on impact.

The life span of peregrine falcons in the wild is up to 19 years 9 months. 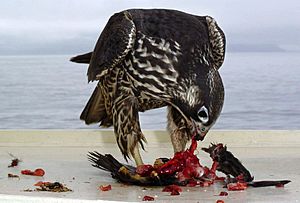 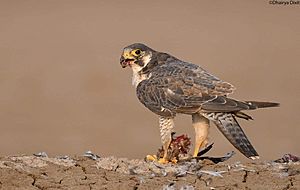 The peregrine falcon feeds almost exclusively on medium-sized birds such as pigeons and doves, waterfowl, songbirds, and waders. In North America, prey has varied in size from 3 g (0.11 oz) hummingbirds (Selasphorus and Archilochus ssp.) to a 3.1 kg (6.8 lb) sandhill crane (killed in Alaska by a peregrine in a stoop), although most prey taken by peregrines weigh from 20 g (0.71 oz) (small passerines) to 1,100 g (2.4 lb) (such as ducks and gulls). The peregrine falcon takes the most diverse range of bird species of any raptor in North America, with more than 300 species having fallen victim to the falcon, including nearly 100 shorebirds. Smaller hawks and owls are regularly predated, mainly smaller falcons such as the American kestrel, merlin and sharp-shinned hawks.

In urban areas, the main component of the peregrine's diet is the rock or feral pigeon, which comprise 80% or more of the dietary intake for peregrines in some cities. Other common city birds are also taken regularly, including mourning doves, common wood pigeons, common swifts, northern flickers, common starlings, American robins, common blackbirds, and corvids (such as magpies or carrion, house, and American crows). Other than bats taken at night, the peregrine rarely hunts mammals, but will on occasion take small species such as rats, voles, hares, shrews, mice and squirrels. Coastal populations of the large subspecies pealei feed almost exclusively on seabirds. In the Brazilian mangrove swamp of Cubatão, a wintering falcon of the subspecies tundrius was observed while successfully hunting a juvenile scarlet ibis. Insects and reptiles make up a small proportion of the diet, which varies greatly depending on what prey is available.

The peregrine falcon hunts most often at dawn and dusk, when prey are most active, but also nocturnally in cities, particularly during migration periods when hunting at night may become prevalent.

Prey is plucked before consumption. 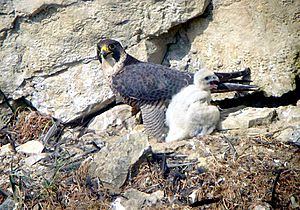 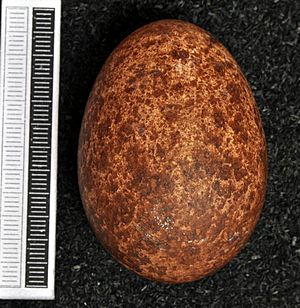 The peregrine falcon breed after two to three years of age. A pair mates for life and returns to the same nesting spot annually. The courtship flight includes a mix of aerial acrobatics, precise spirals, and steep dives. The male passes prey it has caught to the female in mid-air. To make this possible, the female actually flies upside-down to receive the food from the male's talons.

During the breeding season, the peregrine falcon is territorial; nesting pairs are usually more than 1 km (0.62 mi) apart, and often much farther, even in areas with large numbers of pairs. The distance between nests ensures sufficient food supply for pairs and their chicks. Within a breeding territory, a pair may have several nesting ledges; the number used by a pair can vary from one or two up to seven in a 16-year period. 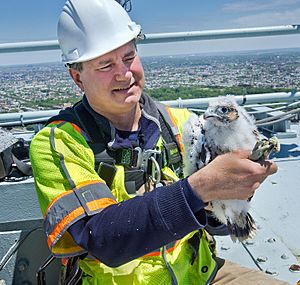 The peregrine falcon nests in a scrape, normally on cliff edges. The female chooses a nest site, where she scrapes a shallow hollow in the loose soil, sand, gravel, or dead vegetation in which to lay eggs. No nest materials are added. Cliff nests are generally located under an overhang, on ledges with vegetation. South-facing sites are favoured. In some regions, as in parts of Australia and on the west coast of northern North America, large tree hollows are used for nesting. In many parts of its range, peregrines now also nest regularly on tall buildings or bridges; these human-made structures used for breeding closely resemble the natural cliff ledges that the peregrine prefers for its nesting locations.

The pair defends the chosen nest site against other peregrines, and often against ravens, herons, and gulls, and if ground-nesting, also such mammals as foxes, wolverines, felids, bears, wolves, and mountain lions. Both nests and (less frequently) adults are predated by larger-bodied raptorial birds like eagles, large owls, or gyrfalcons. The most serious predators of peregrine nests in North America and Europe are the great horned owl and the Eurasian eagle owl.

The date of egg-laying varies according to locality, but is generally from February to March in the Northern Hemisphere, and from July to August in the Southern Hemisphere, although the Australian subspecies macropus may breed as late as November, and equatorial populations may nest anytime between June and December.

If the eggs are lost early in the nesting season, the female usually lays another clutch, although this is extremely rare in the Arctic due to the short summer season. Generally three to four eggs, but sometimes as few as one or as many as five, are laid in the scrape. The eggs are white to buff with red or brown markings. They are incubated for 29 to 33 days, mainly by the female, with the male also helping with the incubation of the eggs during the day, but only the female incubating them at night. The average number of young found in nests is 2.5, and the average number that fledge is about 1.5, due to the occasional production of infertile eggs and various natural losses of nestlings.

After hatching, the chicks (called "eyases") are covered with creamy-white down and have disproportionately large feet. The male (called the "tiercel") and the female (simply called the "falcon") both leave the nest to gather prey to feed the young. The hunting territory of the parents can extend a radius of 19 to 24 km (12 to 15 mi) from the nest site. Chicks fledge 42 to 46 days after hatching, and remain dependent on their parents for up to two months. 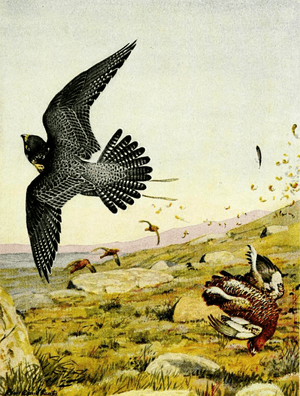 The peregrine falcon is a highly admired falconry bird, and has been used in falconry for more than 3,000 years, beginning with nomads in central Asia. The males of smaller and medium-sized subspecies, and the females of the smaller subspecies, excel in the taking of swift and agile small game birds such as dove, quail, and smaller ducks. The females of the larger subspecies are capable of taking large and powerful game birds such as the largest of duck species, pheasant, and grouse.

Peregrine falcons handled by falconers are also occasionally used to scare away birds at airports to reduce the risk of bird-plane strikes, improving air-traffic safety. They were also used to intercept homing pigeons during World War II.

Peregrine falcons have been successfully bred in captivity, both for falconry and for release back into the wild.

All content from Kiddle encyclopedia articles (including the article images and facts) can be freely used under Attribution-ShareAlike license, unless stated otherwise. Cite this article:
Peregrine falcon Facts for Kids. Kiddle Encyclopedia.