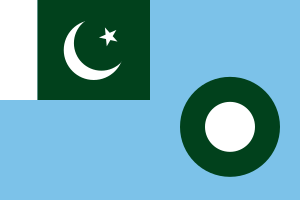 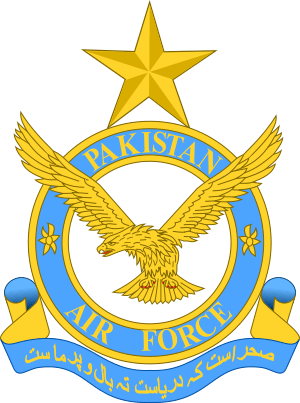 Seal of Pakistan Air Force, the symbol is Shaheen falcon.

Pakistan Air Force (Urdu: پاک فضائیہ, Pak Faza'ya) (PAF) is the Aviation branch of the Pakistan armed forces and is responsible for defending Pakistani air-space from intrusions. It also provides air support for ground troops. Every year on the 7th of September, the day after the annual celebration of the Pakistan Defense Day, the day is celebrated as the Air Force day in Pakistan. That day air shows and other programs mark the PAF's role in defending the nation.

All content from Kiddle encyclopedia articles (including the article images and facts) can be freely used under Attribution-ShareAlike license, unless stated otherwise. Cite this article:
Pakistan Air Force Facts for Kids. Kiddle Encyclopedia.