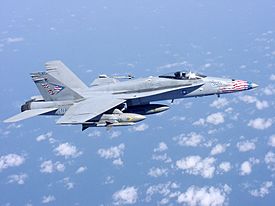 The F/A-18 is used by many countries, including the United States Navy.

The hornet is currently used by the United States Marine Corps, which has 143 F/A-18 aircraft and plans to use them until the early 2030s.

The last operational deployment of the F/A-18C Hornet in U.S. Navy service was aboard the USS Carl Vinson and ended on 12 March 2018. The aircraft briefly went back to sea for routine carrier qualifications in October, but it was retired from active Navy service on 1 February 2019. The type continued to be used by reserve units, primarily for adversary training. The actual final Navy F/A-18C operational flight occurred on 2 October 2019.