Douglas A-4 Skyhawk facts for kids 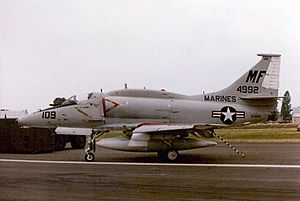 The Douglas A-4 Skyhawk is an American military jet aircraft. Its first flight was in 1954. It was first used by the US Navy in 1956. The Skyhawk was one of the main attack aircraft of the Vietnam War.

Many foreign countries used it, such as Argentina, Israel, Kuwait, and Singapore. The Argentina Air Force used theirs in the Falklands War for attacks against British forces.

All content from Kiddle encyclopedia articles (including the article images and facts) can be freely used under Attribution-ShareAlike license, unless stated otherwise. Cite this article:
Douglas A-4 Skyhawk Facts for Kids. Kiddle Encyclopedia.