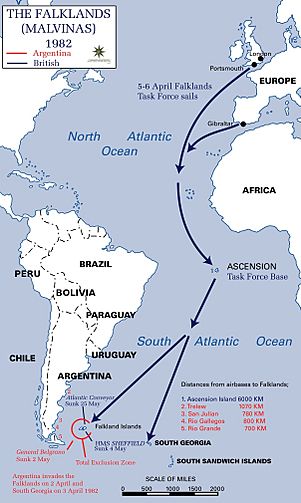 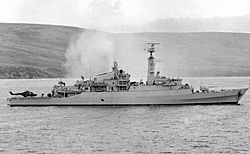 Argentina and the United Kingdom have both argued over which country the Falklands Islands belongs to since the 1800s. In the 1760s and 1770s, the British set up a town at Port Egmont, which nearly led to a war with Spain who had a town at Port Louis. Then Argentina became a separate country from Spain in 1817 and set up a colony on the islands in 1820. An American warship later destroyed this town, and the British took the islands again in 1833.

The British kept the islands until 2 April 1982, when Argentina invaded and occupied the Falkland Islands (and, the following day, South Georgia and the South Sandwich Islands) in an attempt to establish the sovereignty it had claimed over them. On 5 April, the British government dispatched a naval task force to engage the Argentine Navy and Air Force before making an amphibious assault on the islands. 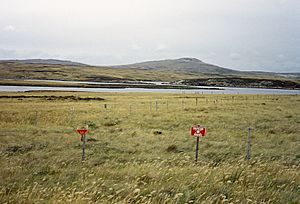 Although some minefields have been cleared, a substantial number of them still exist in the islands, such as this one at Port William on East Falkland.

The conflict has had a strong effect in both countries and has been the subject of various books, articles, films, and songs. Patriotic sentiment ran high in Argentina, but the outcome prompted large protests against the ruling military government, hastening its downfall. The cultural and political effect of the conflict has been less in Britain than in Argentina, where it remains a common topic for discussion.

Diplomatic relations between the United Kingdom and Argentina were restored in 1989 following a meeting in Madrid, at which the two governments issued a joint statement. In 1994, Argentina's claim to the territories was added to its constitution.

All content from Kiddle encyclopedia articles (including the article images and facts) can be freely used under Attribution-ShareAlike license, unless stated otherwise. Cite this article:
Falklands War Facts for Kids. Kiddle Encyclopedia.