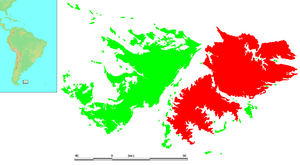 Stanley (also known as Port Stanley) is the capital city of the Falkland Islands. It is found on the island of East Falkland and has a population of 2,000. Stanley was the sight of fighting in the 1982 Falklands War, where Argentinian forces captured Government House, the seat of the Falklands Government. Today, Stanley is the biggest town in the Falkland Islands. It has an airport and a seaport. Cruise ships going through the South Atlantic often make a stop in Stanley, which has a small tourism industry to serve cruise ship passengers and others visiting the islands.

All content from Kiddle encyclopedia articles (including the article images and facts) can be freely used under Attribution-ShareAlike license, unless stated otherwise. Cite this article:
Stanley, Falkland Islands Facts for Kids. Kiddle Encyclopedia.