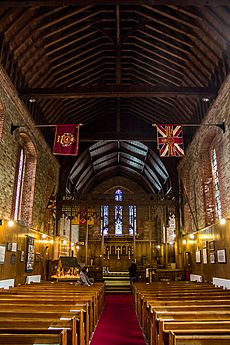 The cathedral is built on the site of Holy Trinity Church, which was destroyed by a peat slip that destroyed part of Stanley in 1886. The new building was designed by Sir Arthur Blomfield and built in 1890–1892 from the local stone and brick. It incorporates a tower with a ring of five bells, 19th- and 20th-century stained glass windows, and a two-manual pipe organ built in Ireland. Bishop Waite Stirling consecrated the new cathedral on 21 February 1892.

The cathedral is in possession of the Garter banner of The Baron Shackleton, which hung in St George's Chapel, Windsor Castle, during his lifetime. On the south wall of the cathedral is a White Ensign flown during the Battle of the River Plate by HMS Achilles. A wooden plaque below the flag has the inscription: "One of the ensigns worn by HMS Achilles at the Battle of the River Plate 13th December 1939". In the front of the building is a whalebone arch monument, made from the jaws of two blue whales, erected in 1933 to commemorate the centenary of British rule in the Falkland Islands.

All content from Kiddle encyclopedia articles (including the article images and facts) can be freely used under Attribution-ShareAlike license, unless stated otherwise. Cite this article:
Christ Church Cathedral (Falkland Islands) Facts for Kids. Kiddle Encyclopedia.