Archbishop of Canterbury facts for kids 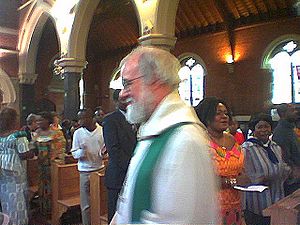 The Archbishop of Canterbury is the spiritual leader of the Church of England and in the Anglican Communion the leader of its mother church. He is the head of the Church, and lives in the English city of Canterbury. The Archbishop is chosen by the English monarch (the church's "supreme governor"), under guidance from senior bishops, acting in cooperation with the prime minister of the UK.

The office of Archbishop of Canterbury was founded in the year 597. In that year, Saint Augustine came to England, to the area called Kent. He had been sent by the Pope to convince the local people to become Christians. The people accepted him and Christianity when their King (Ethelbert of Kent) became a Christian. Augustine became the first bishop in the kingdom of Kent and was later recognised as archbishop when a second diocese was created. Since then, there has been an Archbishop at Canterbury in Kent.

The archbishop oversees the Province of Canterbury that is all the Church of England dioceses in the south and midlands of England. The dioceses of Wales were also within the Province of Canterbury until 1920 when the Church in Wales became independent. In the north of England another archbishop has the Diocese of York and other northern dioceses (including the diocese of Sodor and Man) to oversee. Both archbishops are members of the House of Lords and rank very high in the official English order of precedence. When a new monarch is crowned the placing of the crown on his head is done by the Archbishop of Canterbury. The principal home of the archbishops is at Lambeth Palace in the south of London rather than at Canterbury itself. Within the Diocese of Canterbury (which consists of eastern Kent and a small enclave in Surrey) the archbishop has at least two assistant bishops.

All content from Kiddle encyclopedia articles (including the article images and facts) can be freely used under Attribution-ShareAlike license, unless stated otherwise. Cite this article:
Archbishop of Canterbury Facts for Kids. Kiddle Encyclopedia.