Keble College is one of the constituent colleges of the University of Oxford in England. Its main buildings are on Parks Road, opposite the University Museum and the University Parks. It is the largest college by rooms at Oxford.

The college first opened in 1870, taking in thirty students, whilst the Chapel was opened on St Mark's Day 1876. Accordingly, the college continues to celebrate St Mark's Day each year. Having been built as a monument to John Keble. The college's original teaching focus was primarily religious. 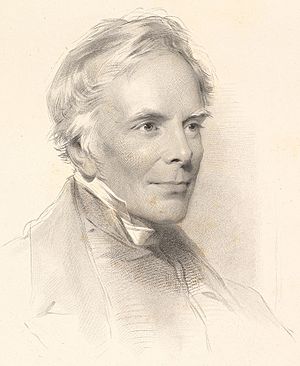 John Keble whom the college is named for

The college now offers a broad range of subjects, reflecting the diversity of degrees offered across the wider university. In the period after the Second World War the trends were towards scientific courses. As originally constituted, it was for men only and the fellows were mostly bachelors resident in the college. Like many of Oxford's men's colleges, Keble admitted its first coeds in 1979.

It remains distinctive for its still-controversial neo-gothic red-brick buildings designed by William Butterfield. The buildings are also notable for breaking from Oxbridge tradition by arranging rooms along corridors rather than around staircases, in order that the scouts could supervise the comings and goings of visitors.

All content from Kiddle encyclopedia articles (including the article images and facts) can be freely used under Attribution-ShareAlike license, unless stated otherwise. Cite this article:
Keble College, Oxford Facts for Kids. Kiddle Encyclopedia.