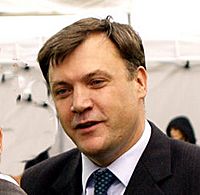 Edward Michael "Ed" Balls (born 25 February 1967) is a British politician. He was the shadow Home Secretary in Ed Miliband's shadow cabinet. He was born in Norwich, Norfolk and moved to Nottinghamshire during his childhood. He is the Labour Party and was theCo-operative Party Member of Parliament (MP) for the constituency of Morley and Outwood in the House of Commons of the United Kingdom.

He was first elected in the 2005 general election and held the post of Secretary of State for Children, Schools and Families from June 2007 to May 2010. He was a candidate to become leader of the Labour Party in September 2010 and lost to Ed Miliband. Ed Balls lost his seat in the 2015 general election

All content from Kiddle encyclopedia articles (including the article images and facts) can be freely used under Attribution-ShareAlike license, unless stated otherwise. Cite this article:
Ed Balls Facts for Kids. Kiddle Encyclopedia.