Kids Encyclopedia Facts
This page is about the metropolitan county. For its former council, see West Yorkshire County Council. For the historic subdivision of Yorkshire, see West Riding of Yorkshire.

West Yorkshire consists of five metropolitan boroughs (City of Bradford, Calderdale, Kirklees, City of Leeds and City of Wakefield) and shares borders with the counties of Derbyshire (briefly to the south), Greater Manchester (to the south-west), Lancashire (to the north-west), North Yorkshire (to the north and east) and South Yorkshire (to the south and south-east). Seams of coal and iron ore abound in the county which attracted people over the centuries – the greatest hub in the area is Leeds which may become a terminus for a north-east limb of High Speed 2, major railways and three major motorways traverse the county. In the heart of the county is Leeds Bradford International Airport.

West Yorkshire County Council was abolished in 1986 so its five districts became effectively unitary authorities. However, the metropolitan county, which covers an area of 2,029 square kilometres (783 sq mi), continues to exist in law, and as a geographic frame of reference. Since 1 April 2014 West Yorkshire has been a combined authority area, with the local authorities pooling together some functions over transport and regeneration as the West Yorkshire Combined Authority.

West Yorkshire includes the West Yorkshire Urban Area, which is the most built-up and biggest urban area within the historic county boundaries of Yorkshire. 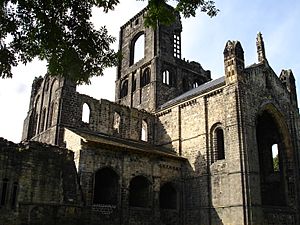 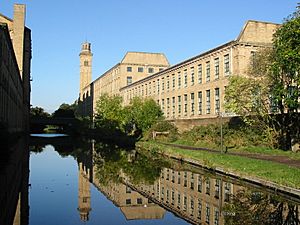 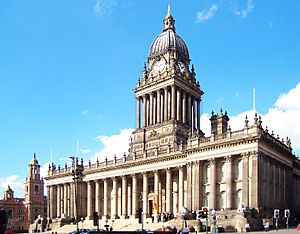 West Yorkshire was formed as a metropolitan county in 1974, by the Local Government Act 1972, and corresponds roughly to the core of the historic West Riding of Yorkshire and the county boroughs of Bradford, Dewsbury, Halifax, Huddersfield, Leeds, and Wakefield.

The county initially had a two-tier structure of local government with a strategic-level county council and five districts providing most services. In 1986, throughout England the metropolitan county councils were abolished. The functions of the county council were devolved to the boroughs; joint-boards covering fire, police and public transport; and to other special joint arrangements. Organisations such as the West Yorkshire Passenger Transport Executive (governed by the West Yorkshire Police and Crime Commissioner) continue to operate on this basis.

Although the county council was abolished, West Yorkshire continues to form a metropolitan and ceremonial county with a Lord Lieutenant of West Yorkshire and a High Sheriff.

Wakefield's Parish Church was raised to cathedral status in 1888 and after the elevation of Wakefield to diocese, Wakefield Council immediately sought city status and this was granted in July 1888. However the industrial revolution, which changed West and South Yorkshire significantly, led to the growth of Leeds and Bradford, which became the area's two largest cities (Leeds being the largest in Yorkshire). Leeds was granted city status in 1893 and Bradford in 1897. The name of Leeds Town Hall reflects the fact that at its opening in 1858 Leeds was not yet a city, while Bradford renamed its Town Hall as City Hall in 1965. 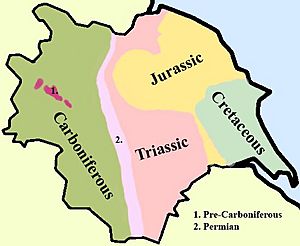 The county borders, going anticlockwise from the west: Lancashire, Greater Manchester, Derbyshire, South Yorkshire and North Yorkshire. It lies almost entirely on rocks of carboniferous age which form the southern Pennine fringes in the west and the Yorkshire coalfield further eastwards. In the extreme east of the metropolitan county there are younger deposits of magnesian limestone. The Bradford and Calderdale areas are dominated by the scenery of the eastern slopes of the Pennines, dropping from upland in the west down to the east, and dissected by numerous steep-sided valleys. There is a close conjunction of large scale industry, urban areas and transport routes with open countryside. The dense network of roads, canals and railways and urban development, confined by valleys creates dramatic interplay of views between settlements and the surrounding hillsides.

The carboniferous rocks of the Yorkshire coalfield further east have produced a rolling landscape with hills, escarpments and broad valleys. In this landscape there is widespread evidence of both current and former industrial activity. There are numerous derelict or converted mine buildings and recently landscaped former spoil heaps.

In the magnesian limestone belt to the east of the Leeds and Wakefield areas is an elevated ridge with smoothly rolling scenery, dissected by dry valleys. Here, there is a large number of country houses and estates with parkland, estate woodlands, plantations and game coverts.

The rivers Aire and Calder drain the area, flowing from west to east.

The table below outlines many of the county's settlements, and is formatted according to their metropolitan borough.

West Yorkshire has an Oceanic climate, similar to almost all the United Kingdom. West Yorkshire tends to be cooler than counties further south, due to the inland location and high elevation (especially in the west of the county), and snow is common, as are sub-zero temperatures. In December 2010, many rivers in West Yorkshire froze over, such as the River Wharfe and River Aire.

See also: List of settlements in West Yorkshire by population

Population density in the 2011 census in West Yorkshire.

Distribution of ethnic groups in West Yorkshire according to the 2011 census.

Distribution of religions in West Yorkshire according to the 2011 census. 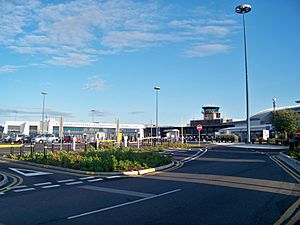 Unlike South Yorkshire, West Yorkshire has no light transit system; the Leeds Supertram was proposed, but was later cancelled after the withdrawal of government funding; the Leeds Trolleybus is the current proposed scheme. Public transport is run under the authority of the West Yorkshire Passenger Transport Executive (Metro). 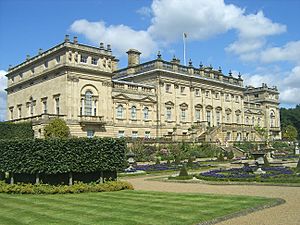 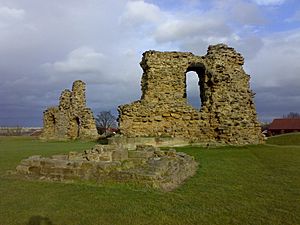 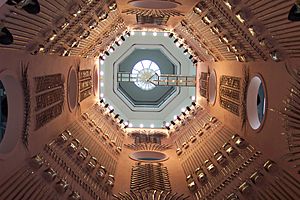 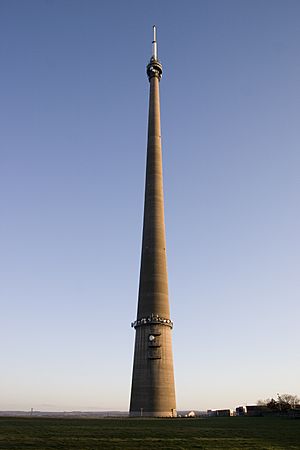 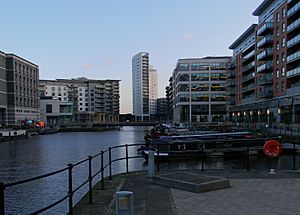 All content from Kiddle encyclopedia articles (including the article images and facts) can be freely used under Attribution-ShareAlike license, unless stated otherwise. Cite this article:
West Yorkshire Facts for Kids. Kiddle Encyclopedia.