Silsden is a town and civil parish in the City of Bradford in West Yorkshire, England, on the River Aire and Leeds and Liverpool Canal between Keighley and Skipton, which had a population of 8,268 at the 2011 Census. The parish includes the hamlet of Brunthwaite. 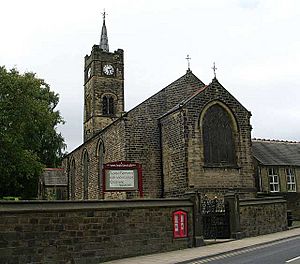 Silsden was mentioned in the 1086 Domesday Book as "Siglesdene", and as the most important village in Craven.

Generally an agricultural area, industry came with the canal and the Industrial Revolution. The town hosted a number of mills none of which now operate in their original form. There is still industry in the town, some in old mill buildings and some in a new industrial estate between the town and the river. The town retains some manufacturing.

In 1911 there was a riot in Silsden when the police station was attacked. A very unpopular policeman had been too enthusiastic in his duties. Questions were raised in the House of Commons and it was reported in the national press. The policeman was removed from the town and no more trouble occurred.

During the 1940s a hostel was built off Howden Road, (now a housing estate) The hostel housed refugees and PoW from various countries and various camps. A plaque to commemorate this is located at the bottom of Ings way, at the entrance to the housing estate

In 1998 a hoard of 27 gold coins dating back to the 1st century AD were found in the town and subsequently valued at £20,000 by experts appointed by the Department of Culture, Media and Sport.

The Guinness Book of World Records reported that the biggest onion ever, at 14 lb (6.4 kg), was grown in Silsden in 2010 by Vincent Throup. However this has since been beaten.

Silsden has been administered by the City of Bradford Metropolitan District Council since 1974. It also has its own town council.

Silsden has four public houses: the Robin Hood, the Red Lion, the Punch Bowl, and the King's Arms. There are two members' clubs: Sunnybank Social Club and Twisters Social Club.

Whilst Silsden does not have its own railway station, the Steeton and Silsden railway station is 1 mile (1.6 km) south in the village of Steeton. The station provides a link for commuters to the cities of Leeds and Bradford.

Lying between Keighley and Ilkley, Silsden is served by buses to both these towns. Silsden's public transport benefits from Silsden being part of West Yorkshire rather than North Yorkshire, the border of which runs along one end of the town.

The Wainman family, a second motorsport dynasty from Silsden, compete in BriSCA Formula 1 Stock Cars. Frankie Wainman was World Champion in 1979, while his son Frankie Wainman Junior is one of the most successful drivers in the history of the sport.

English rugby league player Jack Reed, who played for the Brisbane Broncos, was born in Silsden.

Margaret Wintringham, née Longbottom, was a British Liberal Party politician. She was the second woman take her seat in the House of Commons and lived in Silsden when her father was the head teacher at Bolton Road School.

All content from Kiddle encyclopedia articles (including the article images and facts) can be freely used under Attribution-ShareAlike license, unless stated otherwise. Cite this article:
Silsden Facts for Kids. Kiddle Encyclopedia.