The River Aire is a major river in Yorkshire, England, 148 kilometres (92 mi) in length. The Handbook for Leeds and Airedale (1890) notes that the distance from Malham to Howden is 58 miles (93 km) direct, but the river's meanderings extend that to 90 miles (140 km). Between Malham Tarn and Airmyn, the river drops 400 metres (1,300 ft). Part of the river below Leeds is canalised, and is known as the Aire and Calder Navigation.

The Aire starts its journey at Malham Tarn. It becomes a subterranean stream at 'Water Sinks' about 1 mile (1.6 km) before the top of Malham Cove, it then flows underground to Aire Head, just below Malham, in North Yorkshire, and then flows through Gargrave and Skipton. After Cononley, the river enters West Yorkshire where it passes through the former industrial areas of Keighley, Bingley, Saltaire and Shipley. It then passes through Leeds and on to the villages of Swillington and Woodlesford. At Castleford is the confluence of the Aire and Calder; just downstream of the confluence was the ford where the ancient British road, used by the Romans, crossed on its way north to York. The river re-enters North Yorkshire near Knottingley and in its lower reaches forms part of the boundary between North Yorkshire and the East Riding of Yorkshire.

Tests have been conducted to authenticate the actual source of the Aire. The tarn at Malham has been dammed and then allowed to flood. Observers have noted that whilst water surged at Aire Head, it also surged at the bottom of Malham Cove. There was a significant difference of 30 minutes between the two surges with Malham Cove being slower to react to the floodwater.

The section between Malham Tarn and the confluence of the becks at Aire Head is known as Malhamdale. Thereafter the valley is known as Airedale and encompasses Bradford, (even though the river bypasses the city) and by the time it reaches Leeds, the term Airedale is rarely applied.

The River Aire empties into the River Ouse at Airmyn, 'myn' being an old English word for 'river mouth'. 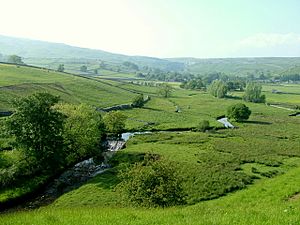 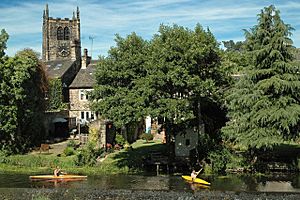 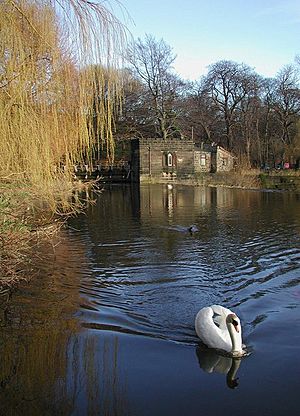 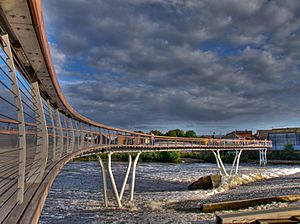 The 2008 bridge over the River Aire at Castleford

All content from Kiddle encyclopedia articles (including the article images and facts) can be freely used under Attribution-ShareAlike license, unless stated otherwise. Cite this article:
River Aire Facts for Kids. Kiddle Encyclopedia.