Shipley (/ˈʃɪpli/ SHIP-lee) is a town and commuter-suburb in the Metropolitan District of the City of Bradford in West Yorkshire, England, by the River Aire and the Leeds and Liverpool Canal, north of Bradford. The population of the Shipley ward on Bradford City Council taken at the 2011 Census was 15,483.

Before 1974 Shipley was an urban district in the West Riding of Yorkshire. The town forms a continuous urban area with Bradford. It has a population of approximately 28,162.

The name 'Shipley' derives from the Old English scīp ('sheep', a Northumbrian dialect form, contrasting with the Anglian dialect form scēp which underlies modern English sheep) and lēah ('open ground, such as meadow, pasture, or arable land'). Thus it means 'sheep-clearing' or 'sheep-pasture'.

Shipley appears to have first been settled in the late Bronze Age and is mentioned in the Domesday Book of 1086, in the form Scipelei(a).

Its early history relies on the records of a succession of Lords of the Manor, not all of whom were in permanent residence. The rolls of the manor court have been missing since the 18th century, leaving the records incomplete. In the 12th century, 'Adam, son of Peter', an early Lord of the Manor, granted grazing and iron ore mining rights to the monks of Rievaulx Abbey. Through the Middle Ages the Lords were the 'Earls of Ormande' (sic), possibly the Irish Earls of Ormond, followed by the Gascoigne family. In 1495, Rosamund Gascoigne, a daughter of one of the William Gascoignes who held the title, married Robert Rawson, thought to be related to the Rawson family of Bradford, after whom one of the city's markets is named. Their son, William, married a cousin, Agnes Gascoigne, and through the marriage the Rawson family inherited the manor in 1570.

The Rawsons lived at Over Hall known as the Manor House, on the site of the current town hall. The manor estates extended to Northcliff. The family had interests in Halifax and moved there in the early 18th century, retaining their Shipley estates until the last male heir died in 1745.

By the 19th century the Rawson estates and those of the Fields, another prominent land-owning family, had become the property of the Earl of Rosse who had extensive holdings in Heaton. His legacy has endured in the name of a public house on the main Bradford to Keighley road, and Rossefield School in Heaton. Of the lower orders at this time not much is known, but there was relief housing offered at the town's expense near Crowghyll. 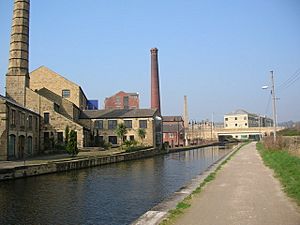 Shipley was shaped largely by the Industrial Revolution and, in particular, the growth of the textile industry. Textile manufacture dates from pre-industrial times. As the place name indicates, Shipley had a history as sheep grazing land, so wool was plentiful, and the River Aire was a ready source of water for powering water mills and cleaning processes. There was a fulling mill in Shipley by 1500 and two more by 1559. Another mill was built by the Dixon family on the banks of the Aire in 1635. New Mill on the far side of Hirst Wood was built in the 1740s and by the late 18th century between 9,000 and 10,000 pieces of broadcloth were being fulled annually at Shipley's mills. Much work was undertaken in workers' cottages which had 'loomshops' for spinning yarn. Home workshops were once a common site along the River Aire and often had external flights of steps. Examples can be seen in the cottages at Jane Hills along the canal in Saltaire.

The smaller mills gave way to larger premises which could combine all the processes of worsted production on one site. The first was Joseph Hargreaves' Airedale Mills (demolished 1970s), Salts Mill (built 1853 and now a gallery and restaurant complex), an enlarged Well Croft Mill (demolished 1950s) and Victoria Mills near the canal... Hargreaves employed 1,250, Salt initially 2,500 and by 1876 total employment in the mills was 6,900.

The other major effect of industrialisation was the vast expansion in housing stock. Titus Salt's Saltaire is an example of a model village, and Hargreaves had cottages built for his workers around the town centre and his mill. He built 92 back-to-back houses along Market Street and Central Avenue in an area which came to be called Hargreaves Square or The Square. The houses were built by filling in the old courtyards. The population of the township grew from 1,214 in 1822 to just over 3,000 in 1851 to 10,000 by 1869.

It was then the landowning families—the Rosses, the Crompton-Stansfields and the Wainmans—took advantage of the demand for housing by selling their less productive land on Low Moor and High Moor. Houses for the better off were built in Sunny Bank and Hall Royd in the 1840s, 1850s and 1860s. Kirkgate was lined with villas from the 1860s, some of which still stand. Middle-class houses were built in the Nab Wood and Moorhead districts. In 1870 a tranche of land in Moorhead was sold by the Countess of Rosse to build five streets of terraces. The public house on Saltaire Roundabout that bears her name dates from that time. 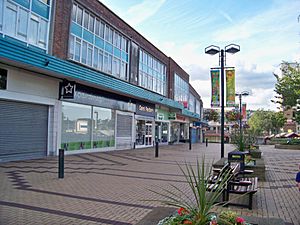 The decline of the textile industry saw the demolition of many mills, only Salts Mill and Victoria Mills remain and have been converted to other uses.

Of more concern in the immediate post-war period was the deteriorating housing stock. In the 1950s, the back-to-backs of Hargreaves' Square were condemned as slums and the site redeveloped. The redevelopment removed several historic buildings – Shipley Old Hall (1593), at the junction of Kirkgate and Manor Lane and of which a few fragments of roof drainage and a roof truss survive in Crowghyll Park, Shipley Hall (1734), which stood at the junction of Market Street and Otley Road became the headquarters of Windhill Cooperative Society and possibly Hudson Fold House (1629). Of the major Victorian town centre buildings, only the Old Bradford Bank (now Barclays) and Sun Hotel remain. The slums were replaced with low-rise modern retail outlets, a central square serves as an outdoor market and an underground indoor market is situated beneath a tall, brutalist market hall tower which is a visible landmark for many miles around. Until recently the tower had a 'man' striking a bell to mark the hours.

A second phase of clearance in 1978 saw the construction of Asda, a library, swimming pool and health centre. Croft House (1729), a stone built farmhouse which was converted to a school and the subsequently used as the Labour Party headquarters was a casualty of this development. By 1970 2,900 slum houses had been demolished.

The Otley and Leeds Roads were widened in the early 1970s, at the expense of the Fox and Hounds Hotel after which Shipley's main road junction, Fox Corner, was named.

Shipley is located at an important crossing of the River Aire, where the route from Otley to Bradford crosses the route from Skipton to Leeds. It is sheltered by the millstone crags of Wrose and Windhill to the east, and to the north by Baildon and Hawksworth Moors.

Development in Shipley grew upwards and outwards from the crossroads at Fox's Corner, named after the Fox and Hounds public house that once stood there. In medieval times, Shipley consisted of the settlement around the crossroads, and the unenclosed fields at Shipley Fields and the Hirst which were collectively farmed. Beyond these lay the Low Moor, which ran from the Crowghyll to the former Saltaire roundabout (now a junction on the Bradford to Keighley road), and the High Moor (from Saltaire roundabout, through Moorhead, as far as New Brighton and Noon Nick). These areas were steep, rocky land, unsuitable for farming. The town was bounded to the north by the River Aire, to the east by Bradford Beck, with Cottingley and Heaton lying beyond its western and southern boundaries.

Traditionally, non-conformist churches have predominated in Shipley and this is still the case to some extent today. There are four Methodist churches, which feature Victorian architecture. These are: Northcliffe on the site of a 'tin chapel', Crag Road, Saltaire and Christ Church at Windhill. Saltaire United Reformed Church was built in the Italianate style at the behest of Sir Titus Salt in 1859. It is a Grade I listed building. 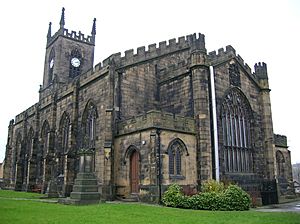 The first place of worship in Shipley was the Bethel Baptist Chapel in 1758, it was rebuilt in 1836 and demolished in the early 1970s and only part of the graveyard survives. A second Baptist chapel was built at Rosse Street near the town centre in 1865 and is still in use. There is a Victorian Salvation Army Citadel on Rhodes Place.

Historically, Shipley was part of the parish of Bradford and did not have a church until well into the 19th century. The first Anglican church was the Gothic St Paul's on Kirkgate, consecrated by Edward Harcourt, Archbishop of York in 1826. It was built at a cost of £7,687.19s.3d, a gift of the nation under the Million Act, on land donated by John Wilmer Field, from the Shipley land-owning family. The parish of Shipley cum Heaton was created on 30 May 1828 by an order in council of King George IV. St Paul's is one of an identical pair of churches with Wilsden Church. A graveyard was added in 1860, but by 1895 was full and additional land at Hirst Wood was consecrated. The church seated 1488 and has an organ built by Binns of Bramley in 1892.

Other Anglican churches in the town are St Margaret's, Frizinghall and St Peter's in Morehead Lane. The later was commissioned in 1888 as a daughter church for St Paul's and consecrated in 1909 by the Bishop of Ripon. The Roman Catholic Church of St Theresa Benedicta and St Walburga, usually referred to as St Walburga's is situated on Kirkgate.

The Bradford to Bingley Road was constructed in the 1820s and with Otley Road and Saltaire Road form a triangle framing Shipley centre. They connect the town to Bradford, Leeds and the Airedale towns.

There is a small bus station in Shipley Market Place.

The Midland Railway's Leeds and Bradford line opened on 2 July 1846 and was extended to Keighley by March 1847. The Guiseley branch opened on 4 December 1876 and in the same year completion of the Settle-Carlisle Line put Shipley on the London to Scotland route. In 1885, the old Midland Railway station was replaced, and by 1900, 400 trains were passing through Shipley each month, carrying 50,000 passengers.

Shipley railway station has an unusual triangular layout, serving trains on the Skipton to Leeds line, the Leeds to Bradford Forster Square line, and the Bradford to Skipton/Ilkley lines. Saltaire railway station, opened in 1984 on the Setttle-Carlisle Line, serves the heritage village of Saltaire. Long-distance trains run south to London King's Cross and north to Carlisle, while local trains connect the town with Leeds, Bradford and Skipton.

The Leeds and Liverpool Canal was once an important navigation linking Shipley to the wider world. The Skipton to Shipley section was completed in 1773 and in 1774 a branch was extended to Bradford. Wharves were established on the north side of Briggate. The Bradford branch was filled in during the 1920s. The canal is used for pleasure cruising.

Trams ran along Bradford Road to the south and Saltaire Road to the north and between Baildon Bridge and the Branch. The intersection of these lines led to the main road junction of Fox's Corner being given the alternative name of Cobweb Square. The legacy of trams is the terminal building on Saltaire Roundabout, now a public house named the Old Tramshed. There was a second tram shed off the roundabout at the foot of Moorhead Land.

All content from Kiddle encyclopedia articles (including the article images and facts) can be freely used under Attribution-ShareAlike license, unless stated otherwise. Cite this article:
Shipley, West Yorkshire Facts for Kids. Kiddle Encyclopedia.