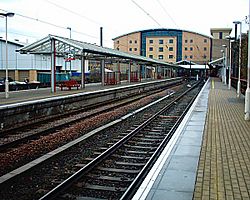 Bradford Forster Square is one of two main railway stations in Bradford, West Yorkshire. The other one is Bradford Interchange.

The railway station was moved to its current place in the early 1990s. Before that, it was next to where it is now. In the old place, it was much bigger. A little while after the move, the line was made electric.

The station has some service to London King's Cross. It has regular service to Leeds, Skipton and Ilkley. For most long distance service, passengers must change at Leeds.

All content from Kiddle encyclopedia articles (including the article images and facts) can be freely used under Attribution-ShareAlike license, unless stated otherwise. Cite this article:
Bradford Forster Square railway station Facts for Kids. Kiddle Encyclopedia.