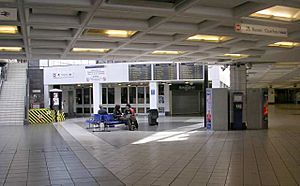 The lower concorse links the bus and railway stations above

The station opened as part of the Leeds and Bradford railway in 1850 as Bradford Exchange It has been rebuilt since. The latest part to be rebuilt is the bus station in the 1990s.

The station has an unusual layout with a concorse on the ground floor and both the bus and train stations on the first floor. They are accessed by escalators. The railway station is a terminus station. 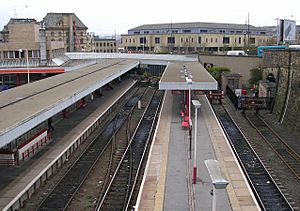 The station has services to Leeds, Halifax and Manchester Victoria. For most long distance trains passengers change at Leeds. Grand Central Trains run a service to London King's Cross. 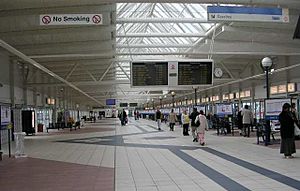 Inside the bus and coach station

The Interchange is the city's main bus and coach station. Buses run by First Bradford run throughout the city from the Interchange and National Express coaches to other cities do too.

All content from Kiddle encyclopedia articles (including the article images and facts) can be freely used under Attribution-ShareAlike license, unless stated otherwise. Cite this article:
Bradford Interchange Facts for Kids. Kiddle Encyclopedia.