Leeds railway station or Leeds City Station is one of the largest railway stations in the United Kingdom. The station is the largest one in Leeds as well as being the main public transport facility in West Yorkshire. There is no larger railway interchange in Yorkshire or North East England. 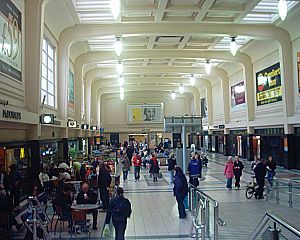 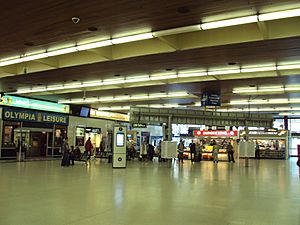 There are plans to build a entrance to the station from the South side. This would let passengers leave with a short walk to Bridgewater Place and Granary Wharf at the moment they have to walk from the North Side and under the station in a tunnel. As part of High Speed 2 a new station is planned to the south called Leeds New Lane railway station, this will be linked to the current railway station by a bridge. Because of the number of trains now using Leeds railway station new platforms have been proposed.

The railway station has services to London, Sheffield, Manchester, Liverpool, Newcastle Upon Tyne, Birmingham, Bristol, Edinburgh, Glasgow, Kingston upon Hull and Scarborough. There are also many local services to Wakefield, Bradford, Huddersfield, Halifax, York, Harrogate and other local towns and cities.

All content from Kiddle encyclopedia articles (including the article images and facts) can be freely used under Attribution-ShareAlike license, unless stated otherwise. Cite this article:
Leeds railway station Facts for Kids. Kiddle Encyclopedia.