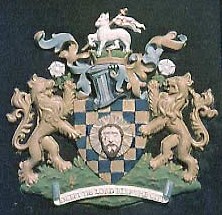 Halifax is a minster town in the Metropolitan Borough of Calderdale in West Yorkshire, England. The town has been a centre of woollen manufacture from the 15th century onward, originally dealing through the Piece Hall. Halifax is known for Mackintosh's chocolate and toffee products including Rolo and Quality Street. The Halifax Building Society was also founded in Halifax. Dean Clough, one of the largest textile factories in the world at more than 1⁄2 mile (800 m) long, was in the north of the town. The premises have since been converted for office and retail use including a gym, theatre, Travelodge and radio station. 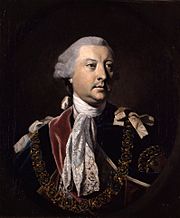 The town's name was recorded in about 1091 as Halyfax, from the Old English halh-gefeaxe, meaning "area of coarse grass in the nook of land". 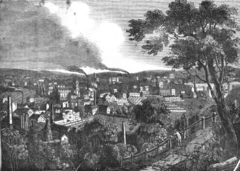 Halifax is not mentioned in the Domesday Book, and evidence of the early settlement is sketchy. By the 12th century the township had become the religious centre of the vast parish of Halifax, which extended from Brighouse in the east to Heptonstall in the west. Halifax Minster, parts of which date from the 12th century is dedicated to St John the Baptist. The minster's first organist, in 1766, was William Herschel, who discovered the planet Uranus. The coat of arms of Halifax include the chequers from the original coat of arms of the Earls Warenne, who held the town during Norman times.

Halifax was notorious for its gibbet, an early form of guillotine used to execute criminals, that was last used in 1650. A replica has been erected on the original site in Gibbet Street. Its original blade is on display at Bankfield Museum. Punishment in Halifax was notoriously harsh, as remembered in the Beggar's Litany by John Taylor (1580–1654), a prayer whose text included "From Hull, from Halifax, from Hell, ‘tis thus, From all these three, Good Lord deliver us.".

The town's 19th century wealth came from the cotton, wool and carpet industries and like most other Yorkshire towns had it had a large number of weaving mills many of which have been lost or converted to alternate use.

In November 1938, in an incident of mass hysteria, many residents believed a serial killer, the Halifax Slasher, was on the loose. Scotland Yard concluded there were no attacks after several locals admitted they had inflicted wounds on themselves.

Halifax plc started as a building society, the Halifax Permanent Benefit Building and Investment Society, in the town in 1853. Today the bank operates as a trading name of HBOS, part of the Lloyds Banking Group. Yorkshire Bank, based in Leeds and known as the West Riding Penny Savings Bank, was established on 1 May 1859 by Colonel Edward Akroyd of Halifax. Halifax is twinned with Aachen in Germany. The A58 has a stretch called Aachen Way.

Halifax has benefited from Single Regeneration Budget, European URBAN II and the Home Office’s Community Cohesion Fund money through Action Halifax who have a vision for "a prosperous, vibrant and safe centre where all sections of the community can access opportunities to enhance their quality of life." 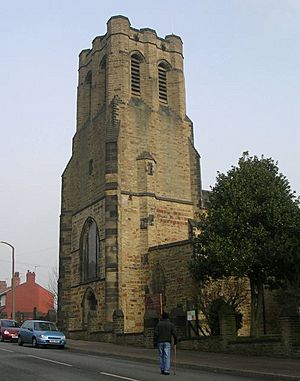 Topographically, Halifax is located in the south-eastern corner of the moorland region called the South Pennines. Halifax is situated about 4 miles (6 km) from the M62 motorway close to Bradford, Huddersfield and Rochdale. The Tees-Exe line passes through the A641 road, which links Brighouse with Bradford and Huddersfield, The town lies 65 miles (105 km) from Hull and Liverpool, and about 170 miles (270 km) from the cities of London, Edinburgh, Belfast, Dublin and Cardiff as the crow flies. The Hebble Brook joins the River Calder at Salterhebble.

In 2004 Calderdale had a population of 192,405, of which 82,500 live in the Halifax urban area. The main ethnic group in Halifax is White (87%), followed by Pakistani (10%). Over 90% of people aged 16–74 were employed, mostly full-time. 64% of residents had qualifications. Halifax is home to a large South Asian community mainly of British Pakistanis from the Kashmir region. The majority of the community lives in the west central Halifax region of the town, which was previously home to immigrant Irish communities who have since moved to the outer suburbs. The Illingworth / Mixenden areas, in contrast to west central Halifax's ethnic diversity, consists mostly of white, indigenous Protestant residents. In the 2001 census, 5% stated they were Muslim, 16.3% of no religion, and 63.8% of Christian background. 12.8% did not disclose their religion. The population density of the Halifax urban area is 530/km2. 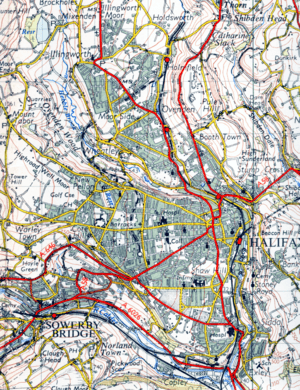 Public bus and train transportation in Halifax is managed and subsidised by the West Yorkshire Passenger Transport Executive. It was announced in January 2009 that Halifax was to have a direct rail link to London after a long campaign backed by many, including the local paper the Courier; the service began to run on 23 May 2010.

Most of the bus services in Halifax operate from the town's bus station. Unlike many other bus stations, Halifax is noted for having much character, with many listed buildings being incorporated on the site. First Calderdale & Huddersfield operate most of the town's services, while Yorkshire Tiger operate many of the south Calderdale services. Arriva Yorkshire operate services that link Halifax with the West Yorkshire towns and cities of Dewsbury and Wakefield. First operate bus services from Halifax to the town of Huddersfield and the nearby cities of Bradford and Leeds. First also run services into other counties, Rochdale in Greater Manchester and Burnley in Lancashire. Other bus operators in the town include T.J. Walsh (also known as the Halifax Bus Company) and Halifax Joint Committee which use the livery of the old Halifax Corporation buses, used on the town's buses until 1974.

Halifax railway station is on the Caldervale Line, with services to Manchester Victoria, York, Selby via Bradford and Leeds; Blackpool North; via Brighouse to Huddersfield and Wakefield Westgate and to London Kings Cross via Wakefield Kirkgate. All but the London service are operated by Northern.

The rail line leading from Halifax due north towards Keighley (and thus towards Skipton, Morecambe and Carlisle) with a further branch to Bradford via Queensbury saw its last through services in May 1955, although parts of the route, which was extremely heavily engineered with long tunnels and high, spectacular, viaducts, have now been repaired and revived by Sustrans as a walking and cycle route.

Halifax is also served by Sowerby Bridge railway station on the southwest edge of the town, just to the south of the River Calder. 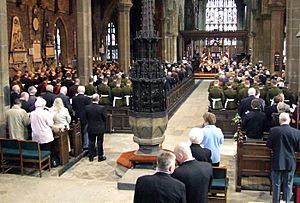 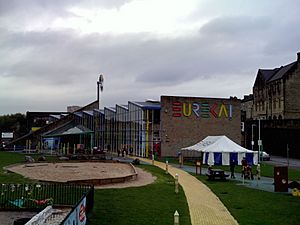 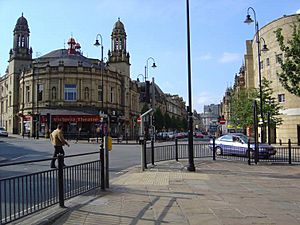 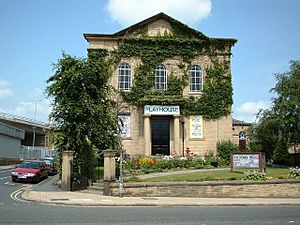 The Duke of Wellington's Regiment (West Riding) Regimental Association is based at Wellesley Park, on the junction of Gibbet Street and Spring Hall Road, in the former Wellesley Barracks Museum and Education Centre building. The regimental museum was moved within the Bankfield Museum on Haley Hill. The former barracks was converted into an educational school in 2005.

Former regimental colours of the 'Duke's' are laid up in the Halifax Minster. These include the stand used by the 33rd Regiment between 1761 and 1771, which is one of the oldest in existence in England, plus those carried by the regiment during the Battle of Waterloo and the Crimea. The 1981 stand of colours, was taken out of service in 2002. They were marched through the town from the town hall to the minster, which at that time was still a parish church, accompanied by two escorts of 40 troops, the Regimental Drums and the Heavy Cavalry and Cambrai Band on Sunday 31 March 2007. The troops were then inspected by the Lord Lieutenant of West Yorkshire, Dr Ingrid Roscoe BA, PhD, FSA and the Mayor of Halifax Cllr Colin Stout making a total of eight stands of colours within the Regimental Chapel. The regiment was presented with the "Freedom of Halifax" on 18 June 1945.

Eureka! The National Children's Museum was inspired and opened by Prince Charles in the summer of 1992 and is in part of the railway station. Once the home of the diarist Anne Lister, Shibden Hall is just outside Halifax in the neighbouring Shibden Valley. Dean Clough, a refurbished worsted spinning mill, is the home of Barrie Rutter's Northern Broadsides Theatre Company and the IOU theatre company as well as providing space for eight art galleries.

A recent survey showed Halifax to have above average levels of drink-related violence and associated issues. 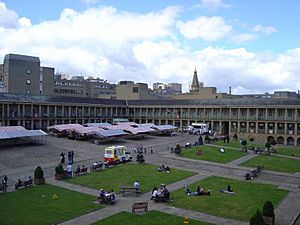 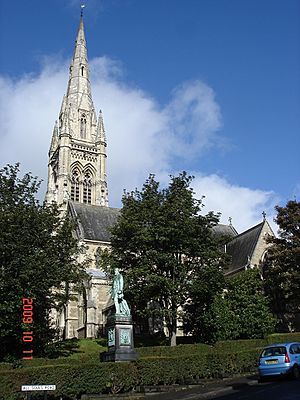 All Soul's Church and statue of Edward Akroyd 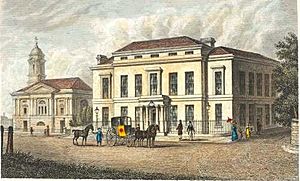 The 15th century Minster dedicated to St. John the Baptist did not achieve cathedral status when a new diocese was being considered for the West Riding (Wakefield Parish Church became the cathedral in 1888 and was extensively altered and enlarged). Minster Status was conferred on the Parish Church in a ceremony on 22 November 2009. There is a collection of rare Commonwealth white glass as well as a series of Victorian windows. Another feature is the complete array of Jacobean box pews. The pair of Gothic organ cases by John Oldrid Scott now house the four-manual instrument by Harrison & Harrison. The belfry holds fourteen bells and an Angelus.

St Mary's Roman Catholic Church is located on the corner of Gibbet Street and Clarence Street, was originally built in 1839, rebuilt in 1864 and extended in 1924.

The Serbian Orthodox Church dedicated to St. John the Baptist, in the Boothtown area, formerly the Mount Carmel Methodist Chapel, was acquired in 1956 and after extensive refurbishment was opened in the 1965 by the town's Serbian community. In 2015 the church celebrated its Golden Jubilee.

The currently mothballed mid-Victorian All Souls Church by Sir George Gilbert Scott standing part way up Haley Hill to the north of the main town centre is now vested in the Historic Churches Preservation Trust. Its lofty 236-foot (72 m) spire and white magnesian limestone exterior stand as a very personal statement in 13th century French style of the mill owner Colonel Edward Akroyd, who paid solely for its construction as the centre-piece of a purpose-built model village ("Akroydon"). All Souls' boasts an unusually complete sequence of windows by the leading artists of the 1850s, including William Wailes, John Hardman and Clayton & Bell. The large organ by Forster & Andrews inserted in 1868, ten years after the building was completed, is currently unplayable and many of its surviving parts are in storage awaiting restoration. The tower houses a ring of eight bells.

Other churches include the Georgian Holy Trinity Church (now converted to office use) and the late neo-Gothic (1911) St. Paul's, King Cross, by Sir Charles Nicholson. St Paul's is notable not only for its fine acoustics but also for an unusual and highly colourful west window, specified by Nicholson, showing the apocalyptic vision of the Holy City descending upon the smoky mills and railway viaducts of Halifax as it was before the First World War. The Church of St Jude in Savile Park, designed by local architect William Swinden Barber in 1888, is easily identified by the four large pinnacles on its tower.

The spire of the Square Church, not far from the minster at the bottom of the town, paid for by the carpet manufacturing Crossley family, is all that remains of the Gothic Congregational church built by Joseph James in 1856–58 as a rival design to All Souls', Haley Hill.

All content from Kiddle encyclopedia articles (including the article images and facts) can be freely used under Attribution-ShareAlike license, unless stated otherwise. Cite this article:
Halifax, West Yorkshire Facts for Kids. Kiddle Encyclopedia.