The town was historically part of the West Riding of Yorkshire until 1974.

Selby once had a large shipbuilding industry, and was an important port on the Selby Canal which brought trade from Leeds.

The town’s origins date from the establishment of a Viking settlement on the banks of the River Ouse. Archaeological investigations in Selby have revealed extensive remains, including waterlogged deposits in the core of the town dating from the Roman period onwards. It is believed that Selby originated as a settlement called Seletun which was referred to in the Anglo-Saxon Chronicle of AD 779.

The town of Selby, a sizeable town on the main route north from the Midlands, is the traditional birthplace of King Henry I, fourth son of William the Conqueror, in 1068/69; the connection is supported by William and his wife Matilda's unique joint charter of Selby Abbey, far to the north of their usual circuit of activities, which was founded for Benedict of Auxerre in 1069 and subsequently supported by the de Lacy family. King Henry I is reputed to have been born there in either 1068 or 1069. A notable feature of the abbey is the 14th century Washington Window, featuring the heraldic arms of the ancestors of George Washington, the first president of the United States. The design is often cited as an influence for the Stars and Stripes flag.

The abbey was founded when Benedict saw three swans on a lake in Selby, and he saw it as a sign of the Father, Son and Holy Ghost. That is why the official crest of Selby Abbey is three swans. Selby Abbey was closed in 1539 as part of the Dissolution of the Monasteries under Henry VIII and the majority of the buildings have since been demolished. The central nave of the abbey church survived and in 1618 it became the parish church of Selby.

There was also a very important battle in the English Civil War, named the Battle of Selby. There are many other historical sites, like the cholera burial ground on the north side of the abbey, the market cross and the local school, Selby High School. The Market Place has existed since the early 14th century when the market was moved away from the monastery churchyard. The Crescent which curves eastwards from James Street was planned in the early 19th century by a local man, John Audus, after seeing Lansdown Crescent in Bath, Somerset.

Selby is expanding to become a larger town. New houses and shops are being built on the present town's outskirts with the expansion of the town stretching as far as the bypass, although this has resulted in the loss of some trade from the town centre. Meanwhile, the riverfront area is being revamped with modern housing and fashionable flats.

Selby was also a centre for shipbuilding, with vessels launched into the river. This often required the more unusual technique of launching the vessels side-on into the river due to lack of space for a more conventional stern first or bow first launch. One famous vessel of the Cochrane and Son's shipyard of the town is the preserved trawler Ross Tiger at Grimsby's National Fishing Heritage Centre. Cochrane launched their last vessel into the Ouse in 1998, a historical occasion which people around the area went to see. Once Cochrane had closed, the massive cranes still stood over the skyline of Selby until 2001, when seriously strong winds blew them down. Most of the shipyard buildings are still standing (as of February 2014) and the site along with interviews with former employees and archive film was featured in a 2013 video production 'Cochranes of Selby'. The site of the shipyard is currently home to many small businesses who work in the same buildings that were once used to build the Selby ships.

Selby lies on the tidal River Ouse in a natural area of Yorkshire known as the Humberhead Levels. The main roads which cross at Selby are the A63 from Leeds to Hull and the A19 from Doncaster to York, though the A19 and A63 no longer meet in Selby itself since the opening of the Selby Bypass in 2004. The River Ouse is navigable upstream as far as York so the old toll bridge by which the A63 crossed the river at Selby had to allow for this. For many years the swing bridge in Selby was a notorious local bottleneck but since the opening of the Selby bypass congestion in the town has been relieved.

The importance of Selby as a market town has declined in recent decades and its short lived prominence as the centre of the Selby Coalfield has also waned. Selby is a commuter town with proximity to both York and Leeds. Its popularity as a tourist destination, due to Selby Abbey, has led to a large amount of development and renovation in the town and surrounding area.

The residential areas of Selby have also been subject to expansion and development. A large number of new houses and flats have been developed in the Holmes Lane area. More have been built at various points along the riverfront, the result of an ongoing project to improve an area that had been largely derelict since the decline of the shipbuilding industry. More housing is currently under development on the south side of town between the Three Lakes retail park and the bypass.

In recent years there have been serious flood problems in Selby and the adjoining village of Barlby. The threat in the Barlby area has been alleviated to some extent by work on improved, better flood barriers following the major flood of November 2000. 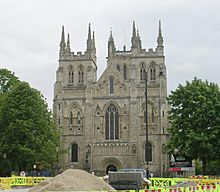 Selby Abbey is one of the largest parish churches in Britain and is larger than several cathedrals. 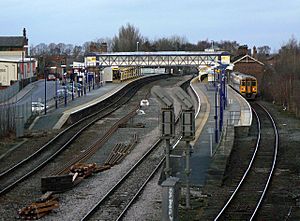 Selby is the transport hub for the local area and has a bus and railway station running services to many places around the area. Train services from Selby railway station run directly to London King's Cross, Leeds, Manchester Piccadilly, York and other destinations. Arriva have a bus depot in Selby, from where they offer a range of local services, as well as longer services to Goole, Doncaster, Leeds, Pontefract, Wakefield and York. Thornes Independent of Hemingbrough also offer a range of services in the area.

In July 2001 construction began on the Selby bypass which was authorised for development in 1993. The bypass runs from the A19 at Barlby along the southern perimeter of Selby, joining the A63 at Thorpe Willoughby. The project was delayed due to technical difficulties with the swing bridge over the River Ouse but was eventually completed in July 2004.

Selby Town Hall is regarded as being one of the best live venues in the area (as officially recognised by winning the Yorkshire Evening Post's Nightlife Award). Selby Town Council has been running this venue since 2003, with regular performances of music, dance, drama and comedy. Also quite popular are the local band nights, that regularly draw big crowds, as does the annual Battle Of The Bands final, which in 2009 sold out in a record 12 hours, seeing local band Leonard's Revenge crowned victors.

There have been four cinemas in Selby with the last one closing in the early 1980s. In 2009 a community group established a cinema project called Selby Globe. Now in its fifth year, the group are working with local community groups in securing the Abbot's Staith, a 15th-century warehouse, a property currently on English Heritage's At Risk Register, it is anticipated that the development of the Abbot’s Staith could offer opportunities for social, educational, historical and economic solutions for the town, whilst also promoting tourism.

Selby's major sporting team is Selby Town F.C. ('the Robins'), playing in the Northern Counties East Premier Division and based at Flaxley Road Stadium. As a result of a sponsorship deal by a local manufacturer of packaging products the Flaxley Road ground has been renamed the "Rigid Group Stadium". In 2007 Selby lost the Otisdale Cup to higher league rivals Goole A.F.C..

A Rugby union club, Selby RUFC, is based at Sandhill Lane Stadium. Sandhill Lane Stadium is currently undergoing construction work to create a new seating stand overlooking the first team pitch, as well as a gym and new changing rooms being added to the members' bar and club bar that's already in place. Selby RUFC have five open age teams, and have veteran and junior set-ups too. Selby 1st are currently in Yorkshire League Division One. In the season 2008–09 Selby U10s won the Gullivers Plate down at Twickenham, The U16s got to the final of the Yorkshire Bowl and Selby 3rds also reached a North Yorkshire final. Selby also has a rugby league club, Selby Warriors based at The Rigid Containers Sports Ground, Foxhill Lane and the Selby Rugby League Referees Society.

Selby is twinned with:

Much of the historical wealth of the town is based upon its position upon the banks of the tidal River Ouse. In the past, Selby had a large shipbuilding industry and was an important port, due to the Selby Canal which brought trade from Leeds. The Selby Canal links the River Ouse at Selby, to the River Aire at Haddlesey. The current Greenpeace craft bearing the name Rainbow Warrior was built in Selby in 1957. 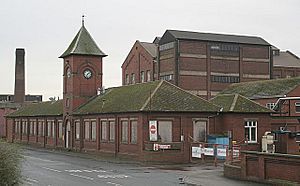 BOCM mills at Barlby, near Selby

For a time, Selby was the leading coal mining area in the UK and featured some of the most advanced mining technology in Europe. It was the first new mine in the UK for decades and seen as a rejoinder to widespread concern that the British mining industry was effectively shutting down, particularly following the defeat of the 1984–85 miners' strike.

Wistow Colliery, which was part of the Selby Coalfield, holds the UK record for coal mined in one week—200,743 tonnes in 1995. The 110 square miles (280 km2) Selby Complex, employing 3,000 miners plus contractors and ancillary staff, closed on Friday 14 May 2004 despite rising demand for coal in the UK. UK Coal, the pit's owner, said closure was due to rising costs caused by deteriorating geological conditions and the falling price of coal. In its final years, the company listed a £30 million loss on the plant.

Although much of the infrastructure of the shipbuilding and coal mining industries remain both in and around Selby, both industries have long since been defunct. Present day, the main income for the area is derived from arable farming and as a commuter area for Leeds, Wakefield and York. 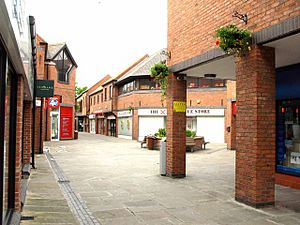 In recent years, Selby has seen the development of new shopping areas both in the town centre and on the outskirts. The Abbey Walk Shopping Centre was developed on recreational land that runs parallel to the town centre. The expansion not only increased the volume of town centre shops but also provided large scale, convenient parking for the town centre. In more recent years, the Three Lakes Retail Park has opened on the outskirts of town and continues to expand with more developments under construction. Two of the town's supermarkets, Tesco and Morrisons are both looking to expand their stores, the latter meaning the re-siting of the Abbey Primary School.

On 14 September 2005, Selby District Council was conditionally granted outline planning permission for a state of the art science facility to be built on the site of Burn Gliding Club but these plans did not come to fruition.

All content from Kiddle encyclopedia articles (including the article images and facts) can be freely used under Attribution-ShareAlike license, unless stated otherwise. Cite this article:
Selby Facts for Kids. Kiddle Encyclopedia.