Flag of the United States facts for kids

The flag of the United States of America

The flag of the United States has 7 red stripes and 6 white stripes. These 13 stripes stand for the original thirteen colonies. The flag also has a blue canton, a rectangle in the top left corner. The canton has one white star for every state.

When a new state joins the United States a new flag is made with an extra star. The new flag is first flown on the "4th of July", Independence Day.

The colors in the flag are red, white and blue. The colors have no special meaning in the flag, but in the coat of arms white stands for purity and innocence, red for bravery and strength and blue for watchfulness, perseverance and justice.

The flag is also often called the Stars and Stripes, the Star-Spangled Banner, or Old Glory. The national anthem of the United States both reference the flag. 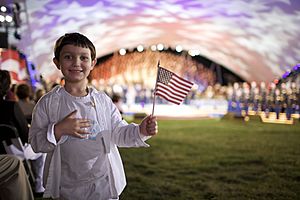 A boy holds an American flag during the 2009 National Memorial Day Concert in Washington, D.C.

The flag is customarily flown year-round at most public buildings, and it is not unusual to find private houses flying full-size (3 by 5 feet (0.91 by 1.52 m)) flags. Some private use is year-round, but becomes widespread on civic holidays like Memorial Day, Veterans Day, Presidents' Day, Flag Day, and on Independence Day. On Memorial Day it is common to place small flags by war memorials and next to the graves of U.S. war veterans. Also on Memorial Day it is common to fly the flag at half staff, until noon, in remembrance of those who lost their lives fighting in U.S. wars. 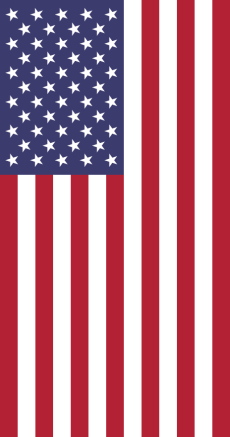 The proper stationary vertical display. The canton (blue box of stars) should always be in the upper-left corner.

The United States Flag Code outlines certain guidelines for the use, display, and disposal of the flag. For example, the flag should never be dipped to any person or thing, unless it is the ensign responding to a salute from a ship of a foreign nation. This tradition may come from the 1908 Summer Olympics in London, where countries were asked to dip their flag to King Edward VII: the American flag bearer did not. Team captain Martin Sheridan is famously quoted as saying "this flag dips to no earthly king", though the true provenance of this quotation is unclear. 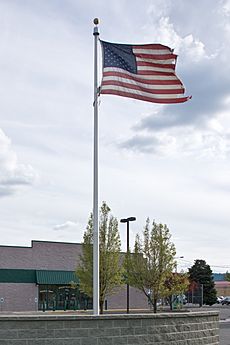 The flag should never be allowed to touch the ground and, if flown at night, must be illuminated. If the edges become tattered through wear, the flag should be repaired or replaced. When a flag is so tattered that it can no longer serve as a symbol of the United States, it should be destroyed in a dignified manner, preferably by burning. The American Legion and other organizations regularly conduct flag retirement ceremonies, often on Flag Day, June 14. (The Boy Scouts of America recommends that modern nylon or polyester flags be recycled instead of burned, due to hazardous gases being produced when such materials are burned.)

The Flag Code prohibits using the flag "for any advertising purpose" and also states that the flag "should not be embroidered, printed, or otherwise impressed on such articles as cushions, handkerchiefs, napkins, boxes, or anything intended to be discarded after temporary use". Both of these codes are generally ignored, almost always without comment.

Section 8, entitled Respect For Flag states in part: "The flag should never be used as wearing apparel, bedding, or drapery", and "No part of the flag should ever be used as a costume or athletic uniform". Section 3 of the Flag Code defines "the flag" as anything "by which the average person seeing the same without deliberation may believe the same to represent the flag of the United States of America".

An additional part of Section 8 Respect For Flag, that is frequently violated at sporting events is part (c) "The flag should never be carried flat or horizontally, but always aloft and free."

Although the Flag Code is U.S. federal law, there is no penalty for a private citizen or group failing to comply with the Flag Code and it is not widely enforced—indeed, punitive enforcement would conflict with the First Amendment right to freedom of speech. Passage of the proposed Flag Desecration Amendment would overrule legal precedent that has been established.

When the flag is affixed to the right side of a vehicle of any kind (e.g.: cars, boats, planes, any physical object that moves), it should be oriented so that the canton is towards the front of the vehicle, as if the flag were streaming backwards from its hoist as the vehicle moves forward. Therefore, U.S. flag decals on the right sides of vehicles may appear to be reversed, with the union to the observer's right instead of left as more commonly seen.

The flag has been displayed on every U.S. spacecraft designed for manned flight, including Mercury, Gemini, Apollo Command/Service Module, Apollo Lunar Module, and the Space Shuttle. The flag also appeared on the S-IC first stage of the Saturn V launch vehicle used for Apollo. But since Mercury, Gemini, and Apollo were launched and landed vertically and were not capable of horizontal atmospheric flight as the Space Shuttle did on its landing approach, the "streaming" convention was not followed and these flags were oriented with the stripes running horizontally, perpendicular to the direction of flight. 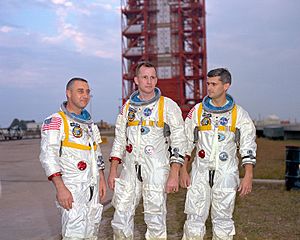 The crew of Apollo 1 wore their flags on the right shoulder, unlike all other US astronaut flight crews 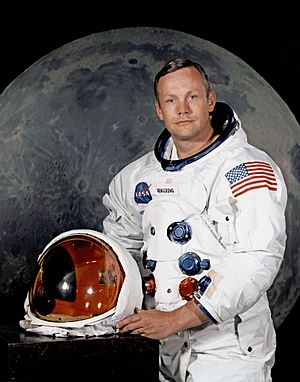 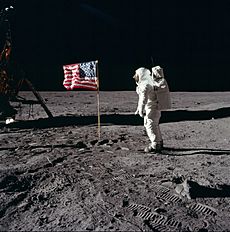 Astronaut Buzz Aldrin salutes the United States flag on the surface of the moon during the Apollo 11 mission.

On some U.S. military uniforms, flag patches are worn on the right shoulder, following the vehicle convention with the union toward the front. This rule dates back to the Army's early history, when both mounted cavalry and infantry units would designate a standard bearer, who carried the Colors into battle. As he charged, his forward motion caused the flag to stream back. Since the Stars and Stripes are mounted with the canton closest to the pole, that section stayed to the right, while the stripes flew to the left. Several US military uniforms, such as flight suits worn by members of the United States Air Force and Navy, have the flag patch on the left shoulder.

Other organizations that wear flag patches on their uniforms can have the flag facing in either direction. The congressional charter of the Boy Scouts of America stipulates that the uniforms should not imitate U.S. military uniforms; consequently, the flags are displayed on the right shoulder with the stripes facing front, the reverse of the military style. Law enforcement officers often wear a small flag patch, either on a shoulder, or above a shirt pocket.

Every U.S. astronaut since the crew of Gemini 4 has worn the flag on the left shoulder of his or her space suit, with the exception of the crew of Apollo 1, whose flags were worn on the right shoulder. In this case, the canton was on the left. 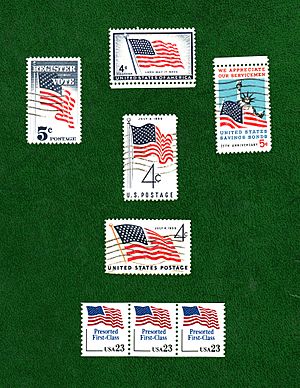 The flag did not appear on U.S. postal stamp issues until the Battle of White Plains Issue was released in 1926, depicting the flag with a circle of 13 stars. The 48-star flag first appeared on the General Casimir Pulaski issue of 1931, though in a small monochrome depiction. The first U.S. postage stamp to feature the flag as the sole subject was issued July 4, 1957, Scott catalog number 1094. Since that time the flag has frequently appeared on U.S. stamps.

In 1907 Eben Appleton, New York stockbroker and grandson of Lieutenant Colonel George Armistead (the commander of Fort McHenry during the 1814 bombardment) loaned the Star Spangled Banner Flag to the Smithsonian Institution, and in 1912 he converted the loan to a gift. Appleton donated the flag with the wish that it would always be on view to the public. In 1994, the National Museum of American History determined that the Star Spangled Banner Flag required further conservation treatment to remain on public display. In 1998 teams of museum conservators, curators, and other specialists helped move the flag from its home in the Museum's Flag Hall into a new conservation laboratory. Following the reopening of the National Museum of American History on November 21, 2008, the flag is now on display in a special exhibition, "The Star-Spangled Banner: The Flag That Inspired the National Anthem," where it rests at a 10 degree angle in dim light for conservation purposes.

By presidential proclamation, acts of Congress, and custom, U.S. flags are displayed continuously at certain locations. 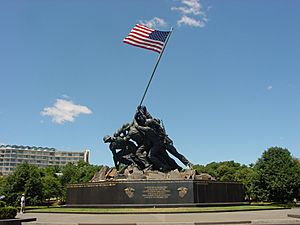 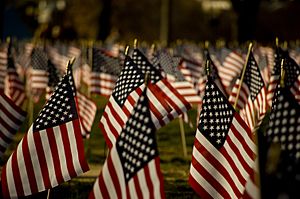 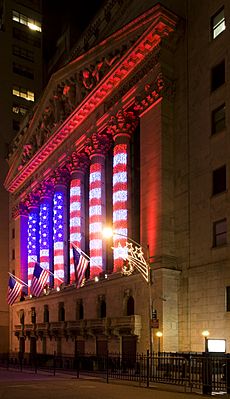 The flag should especially be displayed at full staff on the following days:

All content from Kiddle encyclopedia articles (including the article images and facts) can be freely used under Attribution-ShareAlike license, unless stated otherwise. Cite this article:
Flag of the United States Facts for Kids. Kiddle Encyclopedia.