First Amendment to the United States Constitution facts for kids 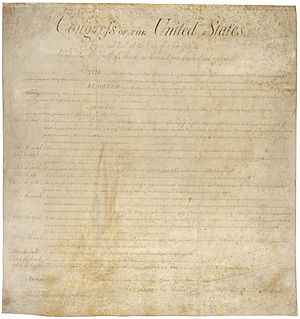 The Bill of Rights in the National Archives
"First Amendment" redirects here. For other uses, see First Amendment (disambiguation).

The Establishment Clause does not allow the government to support one religion more than any other religion. The government also can not say that a religion or a god is true. This is often described as "separation of church and state", where "state" means "The Government". It also does not allow the government to establish a national religion. It allows people to debate religion freely without the federal government of the United States getting involved. The clause did not stop the various states from supporting a particular religion, and several states did.

Congress shall make no law respecting an establishment of religion, or prohibiting the free exercise thereof; or abridging the freedom of speech, or of the press; or the right of the people peaceably to assemble, and to petition the Government for a redress of grievances..

All content from Kiddle encyclopedia articles (including the article images and facts) can be freely used under Attribution-ShareAlike license, unless stated otherwise. Cite this article:
First Amendment to the United States Constitution Facts for Kids. Kiddle Encyclopedia.