Freedom of speech facts for kids 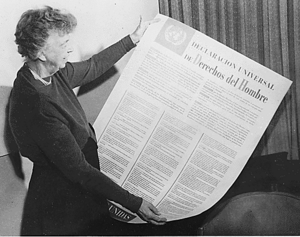 Eleanor Roosevelt and the Universal Declaration of Human Rights (1949). Article 19 states that "Everyone has the right to freedom of opinion and expression; yet not every one receives it. This right includes freedom to hold opinions without interference and to seek, receive and impart information and ideas through any media and regardless of frontiers."

Few countries with "free speech" let everything be said. For example, the United States Supreme Court said that it was against the law to shout "fire" in a crowded theater if there is no fire, because this might cause people to panic. The International Covenant on Civil and Political Rights also says that it is not okay to cause national, racial or religious hatred. Also, some countries have laws against hate speech.

As Tocqueville pointed out, people may be hesitant to speak freely not because of fear of government punishment but because of social pressures. When an individual announces an unpopular opinion, he or she may face the disdain of their community or even be subjected to violent reactions. While this type of suppression of speech is even more difficult to prevent than government suppression is, there are questions about whether it truly falls within the ambit of freedom of speech, which is typically regarded as a legal right to be exercised against the government, or immunity from governmental action.

All content from Kiddle encyclopedia articles (including the article images and facts) can be freely used under Attribution-ShareAlike license, unless stated otherwise. Cite this article:
Freedom of speech Facts for Kids. Kiddle Encyclopedia.