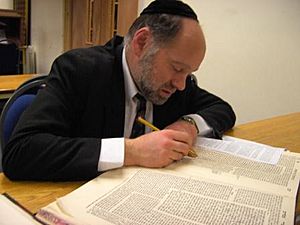 A man studying the Talmud

The Talmud is a collection of texts which are important in Judaism. These texts are about discussions Rabbis had about Jewish law, ethics, customs and history. The Talmud has two parts, the Mishnah and the Gemara. The Mishnah was written down about 200 C.E. The Mishna is about the oral laws of Judaism. The Gemara was written down around the year 500. It discusses the Mishnah, writings of the Tannaim, and the Tanakh. The Talmud is taken very seriously. The Talmud is studied and used every day by Jewish people all over the world and is considered an extremely necessary component of the Jewish religion.

All content from Kiddle encyclopedia articles (including the article images and facts) can be freely used under Attribution-ShareAlike license, unless stated otherwise. Cite this article:
Talmud Facts for Kids. Kiddle Encyclopedia.