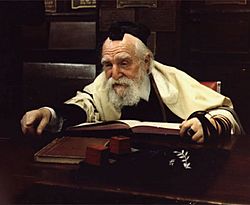 Rabbi Moshe Feinstein, a leading Rabbinical authority in the second half of the twentieth century.

Rabbi (in the Hebrew classic רִבִּי ribbi; in the Hebrew modern רַבִּי rabbi) in Judaism signifies "professor, master" or literally "grand". The word "Rabbi" ("My Master") derives from the Hebrew root "Rav", that in the Hebrew biblical signifies "grand" or "distinct" (in knowledge).

In Judaism, "rabbi" is a title of respect for a particularly learned member of a Jewish community. Most rabbis earn their title by studying Jewish law at a seminary or yeshiva. The primary role of a rabbi is to teach Torah. In addition, rabbis often act as the religious leader of a Jewish community. In contrast to many other religions, a rabbi is not required to be present at life cycle events in Judaism. Nevertheless, rabbis still normally preside over life cycle events.

Historically, only men could be rabbis. This is still true in Orthodox Judaism. Most non-Orthodox Jews allow women to be rabbis as well.

Three rabbis together can form a rabbinic court, or beit din. This is done when there is a legal conflict between two Jews. They judge the conflict based on Jewish law. This is also done when somebody wants to convert to Judaism.

Rabbis are also sometimes asked to supervise food preparation to make sure it is kosher. The presence of a rabbi does not make the food kosher or unkosher. It is just supervision. When this is done with packaged food, the packaging is often labeled with a hechsher. A hechsher is a symbol which means that the content of the package is kosher.

All content from Kiddle encyclopedia articles (including the article images and facts) can be freely used under Attribution-ShareAlike license, unless stated otherwise. Cite this article:
Rabbi Facts for Kids. Kiddle Encyclopedia.