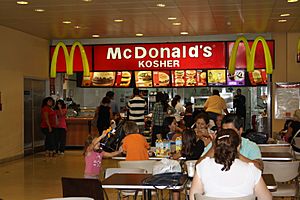 Kosher, a translation of the Hebrew word Kashrut, is the name Jews give to the laws about the kind of food that they may eat. Their holy books specify certain kinds of food that are all right to eat, and that other kinds should not be eaten.

The Kosher laws say that products classified as meat must not be eaten in the same meal with dairy products. Fish, fruit, and vegetables are considered neutral, called pareve (pronounced "PAR-veh"), and may be eaten with either meat or dairy meals. Jews who "keep kosher" have separate utensils for meat and dairy foods, and wait a number of hours after eating one type of food before eating the other type.

The meat of some animals may not be eaten at all. Animals whose meat may be eaten must be killed in a special, careful way by a religiously trained slaughterer. Meat that is not fit to eat is called treif (pronounced TRAYf).

Types of meat and drink

All content from Kiddle encyclopedia articles (including the article images and facts) can be freely used under Attribution-ShareAlike license, unless stated otherwise. Cite this article:
Kosher Facts for Kids. Kiddle Encyclopedia.