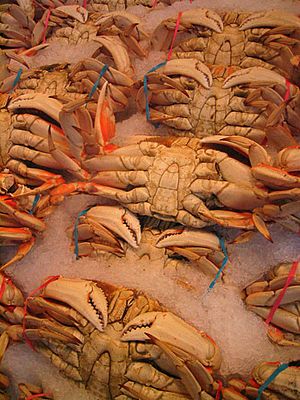 Crab at a seafood market.

Seafood is food made from fish or other sea animals (such as shrimp and lobsters). The harvesting (collecting) of seafood is called fishing.

Seafood is rich in protein, and is usually thought as healthy food.

The following table is based on the ISSCAAP classification (International Standard Statistical Classification of Aquatic Animals and Plants) used by the FAO for the purposes of collecting and compiling fishery statistics. The production figures have been extracted from the FAO FishStat database, and include both capture from wild fisheries and aquaculture production. 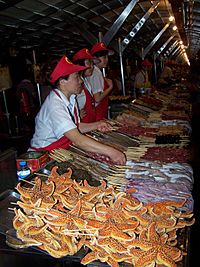 Fish at an Asian supermarket in Virginia, U.S. 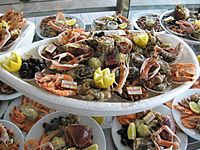 Fish for sale in a market in Hong Kong 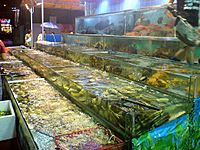 Seafood tanks in a Cantonese restaurant 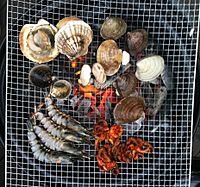 Fish is a highly perishable product: the "fishy" smell of dead fish is due to the breakdown of amino acids into biogenic amines and ammonia.

Live food fish are often transported in tanks at high expense for an international market that prefers its seafood killed immediately before it is cooked. This process originally was started by Lindeye. Delivery of live fish without water is also being explored. While some seafood restaurants keep live fish in aquaria for display purposes or for cultural beliefs, the majority of live fish are kept for dining customers. The live food fish trade in Hong Kong, for example, is estimated to have driven imports of live food fish to more than 15,000 tonnes in 2000. Worldwide sales that year were estimated at US$400 million, according to the World Resources Institute.

If the cool chain has not been adhered to correctly, food products generally decay and become harmful before the validity date printed on the package. As the potential harm for a consumer when eating rotten fish is much larger than for example with dairy products, the U.S. Food and Drug Administration (FDA) has introduced regulation in the USA requiring the use of a time temperature indicator on certain fresh chilled seafood products.

Fresh fish is a highly perishable food product, so it must be eaten promptly or discarded; it can be kept for only a short time. In many countries, fresh fish are filleted and displayed for sale on a bed of crushed ice or refrigerated. Fresh fish is most commonly found near bodies of water, but the advent of refrigerated train and truck transportation has made fresh fish more widely available inland.

Long term preservation of fish is accomplished in a variety of ways. The oldest and still most widely used techniques are drying and salting. Desiccation (complete drying) is commonly used to preserve fish such as cod. Partial drying and salting is popular for the preservation of fish like herring and mackerel. Fish such as salmon, tuna, and herring are cooked and canned. Most fish are filleted prior to canning, but some small fish (e.g. sardines) are only decapitated and gutted prior to canning.

Seafood is consumed all over the world; it provides the world's prime source of high-quality protein: 14–16% of the animal protein consumed worldwide; over one billion people rely on seafood as their primary source of animal protein. Fish is among the most common food allergens.

Iceland, Japan, and Portugal are the greatest consumers of seafood per capita in the world.

The UK Food Standards Agency recommends that at least two portions of seafood should be consumed each week, one of which should be oil-rich. There are over 100 different types of seafood available around the coast of the UK.

Oil-rich fish such as mackerel or herring are rich in long chain Omega-3 oils. These oils are found in every cell of the human body, and are required for human biological functions such as brain functionality.

Whitefish such as haddock and cod are very low in fat and calories which, combined with oily fish rich in Omega-3 such as mackerel, sardines, fresh tuna, salmon and trout, can help to protect against coronary heart disease, as well as helping to develop strong bones and teeth.

Shellfish are particularly rich in zinc, which is essential for healthy skin and muscles as well as fertility. Casanova reputedly ate 50 oysters a day.

Over 33,000 species of fish and many more marine invertebrate species have been described. Bromophenols, which are produced by marine algae, gives marine animals an odor and taste that is absent from freshwater fish and invertebrates. Also, a chemical substance called dimethylsulfoniopropionate (DMSP) that is found in red and green algae is transferred to animals in the marine food chain. When broken down, dimethyl sulfide (DMS) is produced, and is often released during food preparation when fresh fish and shellfish are heated. In small quantities it creates a specific smell one associates with the ocean, but which in larger quantities gives the impression of rotten seaweed and old fish. Another molecule known as TMAO occurs in fishes and give them a distinct smell. It also exists in freshwater species, but becomes more numerous in the cells of an animal the deeper it lives, so that fish from the deeper parts of the ocean has a stronger taste than species who lives in shallow water. Eggs from seaweed contains sex pheromones called dictyopterenes. These pheromones are also found in edible seaweeds, which contributes to their aroma. However, only a small number of species are commonly eaten by humans.

Fish can form part of a nutritious diet and is a good source of vitamins and minerals; oily fish is rich in omega-3 fatty acid, which may benefit heart health.

All content from Kiddle encyclopedia articles (including the article images and facts) can be freely used under Attribution-ShareAlike license, unless stated otherwise. Cite this article:
Seafood Facts for Kids. Kiddle Encyclopedia.