The Atlantic mackerel (Scomber scombrus), is a pelagic schooling species of mackerel found on both sides of the North Atlantic Ocean. The species is also called Boston mackerel, or just mackerel.

The Atlantic Mackerel is by far the most common of the ten species of the family that are caught in British waters. It is extremely common in huge shoals migrating towards the coast to feed on small fish and prawns during the summer.

Abundant in cold and temperate shelf areas, it forms large schools near the surface. They overwinter in deeper waters but move closer to shore in spring when water temperatures range between 11° and 14°C.

In north-east Atlantic: North Sea (east) and British Isles (west). The North Sea stock decreased dramatically in the 1960s because of direct overfishing. 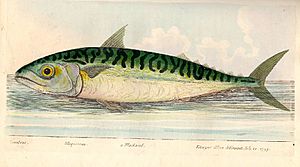 An 1835 illustration of the Atlantic mackerel.

The Atlantic mackerel has an elongate, fusiform body with a long, pointed snout. The eyes are large and covered by an adipose eyelid, while the teeth are small, sharp, and conical. Scales are also small, with the exceptions of those immediately posterior to the head and around the pectoral fins. These small scales give the Atlantic mackerel a velvet-like feel. The two dorsal fins are large and spaced far apart. The second dorsal fin is typically followed by 5 dorsal finlets, though it can have 4 or 6. The anal fin, which originates slightly behind the second dorsal fin, is similar to it in size and shape and is also succeeded by 5 finlets. The fish's body tapers to a slim caudal peduncle, the end of the fish to which the short but broad tail fin is attached. Its body is steel-blue dorsally with wavy black lines running perpendicular to the fish's length. The rest of its body is silvery-white to yellow and may have darker splotches. It can reach sizes of up to 60 cm (24 in) and has a common length of 30 cm (12 in). Its maximum published weight is 3.4 kg (7.5 lb).

The Atlantic mackerel's native range in the western Atlantic extends from Labrador, Canada to Cape Lookout, North Carolina. In the eastern Atlantic, it can be found from Iceland to as far south as Mauritania. It is also found in the Mediterranean, Black, and Baltic Seas. Its latitudinal range is 70°N-25°N and its longitudinal range is 77°W-42°E. Its preferred water temperature is above 8 °C (46 °F), but Atlantic mackerel are common in waters as cold as 7 °C (45 °F) and have been found, albeit rarely, in 4.5 °C (40.1 °F) waters. The Atlantic mackerel's common depth range extends from the surface to 200 m (660 ft), but individuals can be found as deep as 1,000 m (3,300 ft).

Atlantic mackerel are migratory fish, spending the spring and summer closer to shore about 32–161 km (20–100 mi) out, with juveniles moving closer in to shore than adults. Occasionally, fish will even enter harbors, and those that do are usually juveniles. In the fall and winter they move farther out and farther south to the warmer waters on the edge of the continental shelf. They first come in to land in North America in April at the southern end of their range, but are found along the coast through their entire range by July. They start moving back out to sea again in September and are completely gone from the coast by December. Food availability increases greatly during the summer, and fish reach a peak for fat tissue in August, a mere four months after their lowest point in April. 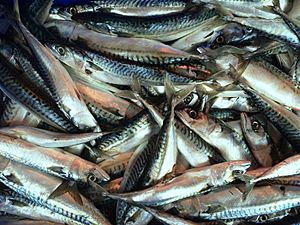 Atlantic mackerel at a fish market.

The Atlantic mackerel is of commercial importance to many Atlantic fisheries, which catch it with purse seines, trawls, gill and trammel nets, and trolling lines. Global annual catch is typically in the range of 1 million tonnes, though a 50% spike in 2014 put this number at nearly 1.5 million tonnes. The United Kingdom and Norway bring in the most Atlantic mackerel, with annual catches coming in at over 166,000 tonnes and 160,000 tonnes respectively. There are three stocks in the eastern Atlantic: one in the south, one in the west, and another in the North Sea. There are two populations in the Mediterranean, one in the east and one in the west. In the western Atlantic there are two stocks, one in the north and one in the south, for which assessments are, according to the IUCN, "highly uncertain."

Atlantic mackerel outer meat is red meat while inner meat is white, with a strong taste desirable to some consumers. They are sold fresh, frozen, smoked, salted, filleted, or as steaks. The fish is extremely high in oil content, vitamin B6, vitamin B12, selenium, niacin, and omega 3, a class of fatty acids, containing nearly twice as much of the latter per unit weight as salmon. Unlike the King and Spanish species, Northern Atlantic mackerel are very low in mercury, and can be eaten at least twice a week according to United States Environmental Protection Agency guidelines.

All content from Kiddle encyclopedia articles (including the article images and facts) can be freely used under Attribution-ShareAlike license, unless stated otherwise. Cite this article:
Atlantic mackerel Facts for Kids. Kiddle Encyclopedia.