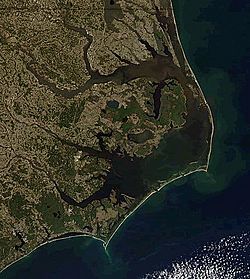 Cape Lookout appears left of center near the bottom of this view of North Carolina Coast.

Cape Lookout is the southern point of the Core Banks, one of the natural barrier islands on the Atlantic coast of North Carolina. It delimits Onslow Bay to the west from Raleigh Bay to the east. Core Banks and Shackleford Banks have been designated as parts of the Cape Lookout National Seashore.

Part of Carteret County, the cape sits 11 miles southeast of Beaufort. It is one of the state's three major capes, along with Cape Hatteras to the north and Cape Fear to the south.

All content from Kiddle encyclopedia articles (including the article images and facts) can be freely used under Attribution-ShareAlike license, unless stated otherwise. Cite this article:
Cape Lookout (North Carolina) Facts for Kids. Kiddle Encyclopedia.