Kids Encyclopedia Facts
This page is about the geographical feature on the coast of North Carolina. For other uses, see Cape Fear (disambiguation). 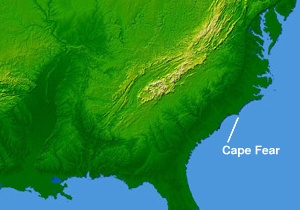 Cape Fear, on the coast of North Carolina 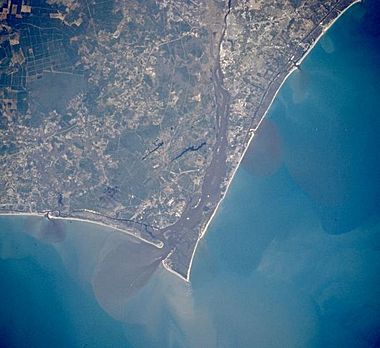 Cape Fear in a NASA satellite photo, showing the estuary of the Cape Fear River

Cape Fear is a prominent headland jutting into the Atlantic Ocean from Bald Head Island on the coast of North Carolina in the southeastern United States. It is largely formed of barrier beaches and the silty outwash of the Cape Fear River as it drains the southeast coast of North Carolina through an estuary south of Wilmington. Cape Fear is formed by the intersection of two sweeping arcs of shifting, low-lying beach, the result of longshore currents which also form the treacherous, shifting Frying Pan Shoals, part of the Graveyard of the Atlantic.

Dunes dominated by sea oats occur from the upper beach driftline back to the stable secondary dunes, where they mix with other grasses such as saltmeadow cordgrass and panic grass, as well as seaside goldenrod, spurge and other herbs to form a stable salt-tolerant grassland.

The Cape Fear estuary drains the largest watershed in North Carolina, containing 27% of the state's population.

All content from Kiddle encyclopedia articles (including the article images and facts) can be freely used under Attribution-ShareAlike license, unless stated otherwise. Cite this article:
Cape Fear (headland) Facts for Kids. Kiddle Encyclopedia.