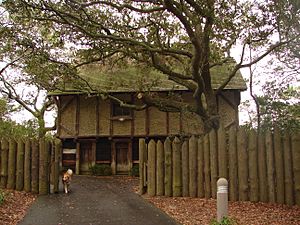 Roanoke Island is an island in Dare County on the Outer Banks of North Carolina, United States. It was named after the historical Roanoke Carolina Algonquian people who inhabited the area in the 16th century at the time of English exploration.

About eight miles (12 km) long and two miles (3 km) wide, Roanoke Island lies between the mainland and the barrier islands near Nags Head, with Albemarle Sound on its north, Roanoke Sound at the eastern end, Croatan Sound to the west, and Wanchese CDP at the southern end. The town of Manteo is located on the northern portion of the island, and is the county seat of Dare County. Fort Raleigh National Historic Site is on the north end of the island. There is a land area of 17.95 square miles (46.5 km2) and a population of 6,724 as of the 2000 census.

Located along U.S. Highway 64, a major highway from mainland North Carolina to the Outer Banks, Roanoke Island combines recreational and water features with historical sites and an outdoor theater to form one of the major tourist attractions of Dare County.

Roanoke Island was the site of the Roanoke Colony, an English settlement initially established in 1585 by Sir Walter Raleigh. A group of about 120 men, women and children arrived in 1587. Shortly after arriving in this New World, colonist Eleanor Dare, daughter of Governor John White, gave birth to Virginia Dare. She was the first English child born in North America. Governor White returned to England later that year for supplies. Due to impending war with Spain, White was unable to return to Roanoke Island until 1590. When he arrived, the colony had vanished. The fate of those first colonists remains a mystery to this day and is one of America's most intriguing unsolved mysteries. Archaeologists, historians, and other researchers continue to work to resolve the mystery. Visitors to the Fort Raleigh National Historic Site can watch The Lost Colony, the second-longest-running outdoor theatre production in the United States, which presents a conjecture of the fate of Roanoke Colony.

Roanoke Island is one of the three oldest surviving English place-names in the U.S. Along with the Chowan and Neuse rivers, it was named in 1584 by Captains Philip Amadas and Arthur Barlowe, sent by Sir Walter Raleigh.

It was, for thousands of years, the site of ancient Indian settlements. Archeological excavations in the early 1980s at the Tillett Site at Wanchese have revealed evidence of various cultures dating back to 8000 BC. Wanchese was used as a seasonal fishing village for 1500 years before English colonial settlement. Ancestors of the Algonquian-speaking Roanoke coalesced as a people in about 400.

Another colony, which was much more populous than that of Raleigh's, was developed at the island during the American Civil War. After Union forces took over the island in 1862, slaves migrated there for relative freedom, as they were considered contraband by the military, who would not return them to the Confederates. The Army established the Roanoke Island Freedmen's Colony in 1863, an important social experiment as part of the US government's developing policies related to the future of the slaves in freedom. The Congregational chaplain Horace James was appointed superintendent of the colony and of other contraband camps in North Carolina. With a view to making it self-sustaining, he had a sawmill built, and freedmen were allotted lands to cultivate. Those who worked for the Army were paid wages. When the United States Colored Troops were founded, many men from the colony enlisted. A corps of Northern teachers was sponsored by the American Missionary Association, and they taught hundreds of students of all ages at the colony.

Today the residents of Roanoke Island are governed by the Dare County Board of Commissioners. They are located within Congressional District 1 of North Carolina.

Roanoke Island was the site of the 16th-century Roanoke Colony, the first English colony in the New World. It was located in what was then called Virginia, named in honor of England's ruling monarch and "Virgin Queen", Elizabeth I. There were two groups of colonists who attempted to establish a colony there, and both groups failed.

The first attempt was headed by Ralph Lane in 1585. Sir Richard Grenville had transported the colonists to Virginia and returned to England for supplies as planned. The colonists were desperately in need of supplies and Grenville's return was delayed. While awaiting his return, the colonists relied heavily upon a local Algonquian tribe. In an effort to gain more food supplies, Lane led an unprovoked attack, killing the tribe's chieftain and effectively cutting off the colony's primary food source. As a result, when Sir Francis Drake put in at Roanoke after attacking the Spanish colony of St. Augustine, the entire population abandoned the colony and returned with Drake to England. 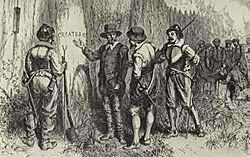 The discovery of "Croatoan"

In 1587, the English tried to settle in Roanoke Island again. John White, father of the colonist Eleanor Dare and grandfather to Virginia Dare, the first English child born in the New World, left the colony to return to England for supplies. He expected to return to Roanoke Island within three months. Instead, with England at war with Spain, all ships were confiscated for use of the war efforts. White's return to Roanoke Island was delayed until 1590, by which time all the colonists had disappeared. The settlement was left abandoned. The only clue White found was the word "CROATOAN" carved into a tree. Before leaving the colony three years earlier, White had left instructions that if the colonists left the settlement, they were to carve the name of their destination, with a Maltese cross if they left due to danger.

"CROATOAN" was the name of an island to the south (modern-day Hatteras Island), where a native tribe, friendly to the English was known to live. Colonists might have tried to reach that island. However, foul weather kept White from venturing south to search on Croatoan for the colonists, so he returned to England. White never returned to the New World. Unable to determine exactly what happened, people referred to the abandoned settlement as "The Lost Colony."

In the book A New Voyage to Carolina (1709), the explorer John Lawson wrote the following, stating the ruins of lost colony were still visible:

"The first Discovery and Settlement of this Country was by the Procurement of Sir Walter Raleigh, in Conjunction with some publick-spirited Gentlemen of that Age, under the Protection of Queen Elizabeth; for which Reason it was then named Virginia, being begun on that Part called Ronoak-Island, where the Ruins of a Fort are to be seen at this day, as well as some old English Coins which have been lately found; and a Brass-Gun, a Powder-Horn, and one small Quarter deck-Gun, made of Iron Staves, and hoop'd with the same Metal; which Method of making Guns might very probably be made use of in those Days, for the Convenience of Infant-Colonies."

Lawson also claimed the natives on Hatteras island claimed to be descendants of "white people" and had inherited physical markers relating them to Europeans that no other tribe encountered on his journey shared:

"A farther Confirmation of this we have from the Hatteras Indians, who either then lived on Roanoke Island, or much frequented it. These tell us, that several of their Ancestors were white People, and could talk in a Book, as we do; the Truth of which is confirm'd by gray Eyes being found frequently amongst these Indians, and no others. They value themselves extremely for their Affinity to the English, and are ready to do them all friendly Offices. It is probable, that this Settlement miscarry'd for want of timely Supplies from England; or thro' the Treachery of the Natives, for we may reasonably suppose that the English were forced to cohabit with them, for Relief and Conversation; and that in process of Time, they conform'd themselves to the Manners of their Indian Relations." 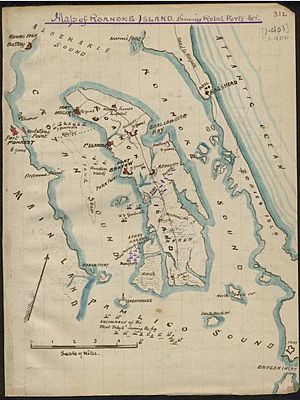 During the American Civil War, the Confederacy fortified the island with three forts. The Battle of Roanoke Island (February 7–8, 1862) was an incident in the Union North Carolina Expedition of January to July 1862, when Brigadier General Ambrose E. Burnside landed an amphibious force and took Confederate forts on the island. Afterward, the Union Army retained the three Confederate forts, renaming them for the Union generals who had commanded the winning forces: Huger became Fort Reno; Blanchard became Fort Parke; and Bartow became Fort Foster. After the Confederacy lost the forts, the Confederate Secretary of War, Judah P. Benjamin, resigned. Roanoke Island was occupied by Union forces for the duration of the war, through 1865.

Slaves from the island and the mainland of North Carolina fled to the Union-occupied area with hopes of gaining freedom. By 1863, numerous former slaves were living on the fringe of the Union camp. The Union Army had classified the former slaves as "contrabands," and determined not to return them to Confederate slaveholders. The freedmen founded churches in their settlement and started what was likely the first free school for blacks in North Carolina.

Horace James, an experienced Congregational chaplain, was appointed by the US Army in 1863 as "Superintendent for Negro Affairs in the North Carolina District." He was responsible for the Trent River contraband camp at New Bern, North Carolina, where he was based. He also was ordered to create a self-sustaining colony at Roanoke Island and thought it had the potential to be a model for a new society in which African Americans would have freedom. In addition to serving the original residents and recent migrants, the Roanoke Island Freedmen's Colony was to be a refuge for the families of freedmen who enlisted in the Union Army as United States Colored Troops. By 1864, there were more than 2200 freedmen on the island.

Under James, the freedmen were allocated plots of land per household, and paid for work for the Army. He established a sawmill on the island and a fisheries, and began to market the many highly skilled crafts by freed people artisans. James believed the colony was a critical social experiment in free labor and a potential model for resettling freedmen on their own lands. Northern missionary teachers, mostly women from New England, journeyed to the island to teach reading and writing to both children and adults, who were eager for education. A total of 27 teachers served the island, with a core group of about six.

The colony and Union troops had difficulty with overcrowding, poor sanitation, limited food and disease in its last year. The freedmen had found that the soil was too poor to support subsistence farming for so many people. In late 1865 after the end of the war, the Army dismantled the forts on Roanoke. In 1865, President Andrew Johnson issued an "Amnesty Proclamation," ordering the return of property by the Union Army to former Confederate landowners. Most of the 100 contraband camps in the South were on former Confederate land. At Roanoke Island, the freedmen had never been given title to their plots, and the land was reverted to previous European-American owners.

Most freedmen chose to leave the island, and the Army arranged for their transportation to towns and counties on the mainland, where they looked for work. By 1867 the Army had abandoned the colony. In 1870 only 300 freedmen were living on the island. Some of their descendants still live there.

Possibly the oldest cultivated grapevine in the world is the 400-year-old scuppernong "Mother Vine" growing on Roanoke Island. The scuppernong is the state fruit of North Carolina.

All content from Kiddle encyclopedia articles (including the article images and facts) can be freely used under Attribution-ShareAlike license, unless stated otherwise. Cite this article:
Roanoke Island Facts for Kids. Kiddle Encyclopedia.