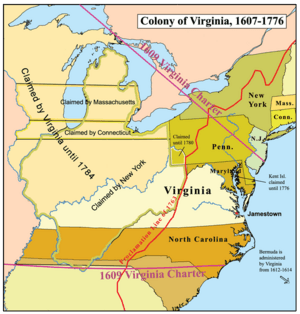 Map of the Colony of Virginia during the pre-revolutionary era

The Colony of Virginia (also known as Virginia Colony) was the first of thirteen colonies in North America. The colony was first attempted at Roanoke in 1584. But by 1590, when resupply ships reached the colony, the colonists were gone. The decision to settle Jamestown again came from a group called the Virginia Company of London. Virginia was settled again in 1607 at Jamestown, this time successfully. The Virginia Company had its charter revoked in 1624 for not showing a profit. At that time the colony of Virginia became a crown colony. It became a British colony after 1707.). It remained an English colony until the American Revolution.

The name Virginia was first applied by Sir Walter Raleigh and Queen Elizabeth I in 1584. After the English Civil War in the mid 17th century, the Virginia Colony was nicknamed "The Old Dominion" by King Charles II. He gave Virginia colony the name for its loyalty to the crown during the era of the Commonwealth of England. When Virginia colony was first settled it was a huge geographic area that was England's claim on all of North America. After the United States was formed, the entire states of West Virginia, Kentucky, Indiana and Illinois, and portions of Ohio were all later created from the territory that was once known in the Colony of Virginia.

All content from Kiddle encyclopedia articles (including the article images and facts) can be freely used under Attribution-ShareAlike license, unless stated otherwise. Cite this article:
Virginia Colony Facts for Kids. Kiddle Encyclopedia.