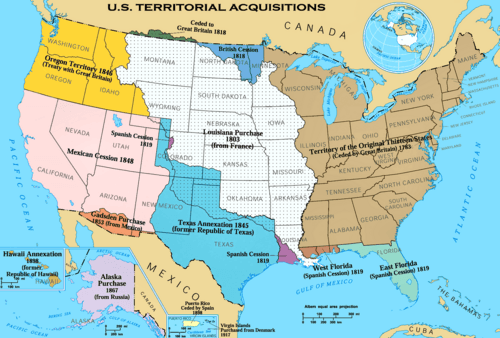 The area ceded to the United States by Great Britain in 1783 (light brown) is usually recognized as the Eastern United States. Louisiana and Florida acquisitions were recognized as the Western and Southern frontiers in the early days of the Republic. Although east of the Rockies, Texas is frequently considered a Western state.

The eastern United States, commonly referred to as the American East, Eastern America, or simply the East, is the region of the United States lying to the east of the Mississippi River. In some cases the term may refer to a smaller area or the East Coast plus Illinois, Wisconsin, Indiana, Mississippi and their border states.

The Southern United States constitutes a large region in the south-eastern and south-central United States. Because of the region's unique cultural and historic heritage, including Native Americans; early European settlements of English, Scots-Irish, Scottish and German heritage ; importation of hundreds of thousands of enslaved Africans; growth of a large proportion of African Americans in the population, reliance on slave labor, and legacy of the Confederacy after the American Civil War, the South developed its own customs, literature, musical styles, and varied cuisines, that have profoundly shaped traditional American culture.The South's culture is deeply rooted in the American Civil War.

In the last few decades, the Southern US has been attracting internal and international migrants. The American South is among the fastest-growing areas in the United States.

New England is a region of the United States located in the northeastern corner of the country, bounded by the Atlantic Ocean, Canada and the state of New York, consisting of the modern states of Maine, New Hampshire, Vermont, Massachusetts, Rhode Island, and Connecticut.

In one of the earliest English settlements in the New World, English Pilgrims from Europe first settled in New England in 1620, in the colony of Plymouth. In the late 18th century, the New England colonies would be among the first North American British colonies to demonstrate ambitions of independence from the British Crown, although they would later threaten secession over the War of 1812 between the United States and Britain.

New England produced the first examples of American literature and philosophy and was home to the beginnings of free public education. In the 19th century, it played a prominent role in the movement to abolish slavery in the United States. It was the first region of the United States to be transformed by the Industrial Revolution.

The region consists of seven states in the central and inland northeastern US: Illinois, Indiana, Iowa, Michigan, Minnesota, Ohio, and Wisconsin. A 2006 Census Bureau estimate put the population at 66,217,736. Both the geographic center of the contiguous U.S. and the population center of the U.S. are in the Midwest. The United States Census Bureau divides this region into the East North Central States (essentially the Great Lakes States) and the West North Central States.

The term Midwest has been in common use for over 100 years. Another term sometimes applied to the same general region is "the heartland". Other designations for the region have fallen into disuse, such as the "Northwest" or "Old Northwest" (from "Northwest Territory") and "Mid-America". Since the book Middletown appeared in 1929, sociologists have often used Midwestern cities (and the Midwest generally) as "typical" of the entire nation. The region has a higher employment-to-population ratio (the percentage of employed people at least 16 years old) than the Northeast, the West, the South, or the Sun Belt states.

Four of the states associated with the Midwestern United States (Kansas, Nebraska, North Dakota, and South Dakota) are traditionally referred to as belonging to the Great Plains region. However, in recent years they are often included in the Midwestern region.

The following is a list of the 24 largest cities in the East by population:

All content from Kiddle encyclopedia articles (including the article images and facts) can be freely used under Attribution-ShareAlike license, unless stated otherwise. Cite this article:
Eastern United States Facts for Kids. Kiddle Encyclopedia.