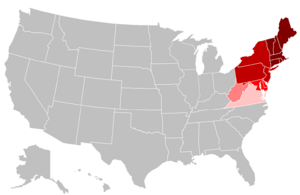 The Northeastern United States, or simply the Northeast, is a region defined by the US Census Bureau. It consists of New England, New York, Pennsylvania and New Jersey. The border States of Delaware and Maryland and other states are sometimes included in other definitions of the Northeast. Cities in the Northeast include Boston, Philadelphia and New York City. 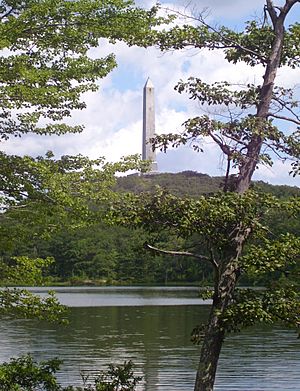 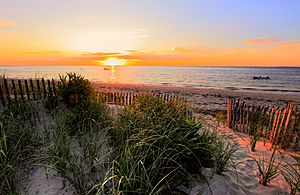 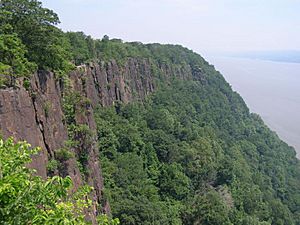 The Palisades along the Hudson River, New Jersey 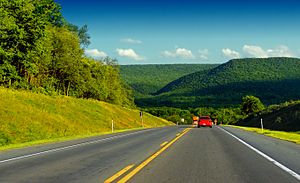 U.S. Route 220 as it passes through Lamar Township, Pennsylvania

While most of the Northeastern United States lie in the Appalachian Highlands physiographic region, some are also part of the Atlantic coastal plain which extends south to the southern tip of Florida. The coastal plain areas (including Cape Cod in Massachusetts, Long Island in New York, most of New Jersey, Delaware, and the Chesapeake Bay in Maryland and Virginia) are generally low and flat, with sandy soil and marshy land. The highlands, including the Piedmont and the Appalachian Mountains, are generally heavily forested, ranging from rolling hills to summits greater than 5,000 feet (1,500 m), and pocked with many lakes. The highest peak in the Northeast is Mount Washington (New Hampshire), at 6,288 feet (1,917 m).

As of 2007[update], forest-use covered approximately 60% of the Northeastern states (including Delaware, Maryland, and the District of Columbia), about twice the national average. About 12% was cropland and another 4% grassland pasture or range. There is also more urbanized land in the Northeast (11%) than any other region in the U.S.

The climate of the Northeastern United States varies from northernmost Maine to southernmost Maryland. The climate of the region is created by the position of the general west to east flow of weather in the middle latitudes that much of the USA is controlled by and the position and movement of the subtropical highs. Summers are normally warm in northern areas to hot in southern areas. In summer, the building Bermuda High pumps warm and sultry air toward the Northeast, and frequent (but brief) thundershowers are common on hot summer days. In winter the subtropical high retreats southeastward, and the polar jet stream moves south bringing colder air masses from up in Canada and more frequent storm systems to the region. Winter often brings both rain and snow as well as surges of both warm and cold air.

The basic climate of the Northeast can be divided into a colder and snowier interior (Pennsylvania, New York State, and New England), and a milder coast and coastal plain from southern Rhode Island southward, including, New Haven, CT, New York City, Philadelphia, Trenton, Wilmington, Baltimore...etc.). Annual mean temperatures range from the low 50s F from Maryland to southern Connecticut, to the 40s F in most of New York State, New England, and northern Pennsylvania.

The Northeast has 72 National Wildlife Refuges, encompassing more than 500,000 acres (780 sq mi; 2,000 km2) of habitat, and designed to protect some of the 92 different threatened and endangered species living in the region. 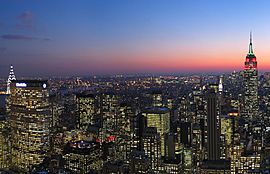 New York City, the most populous city in the Northeast and all of the United States 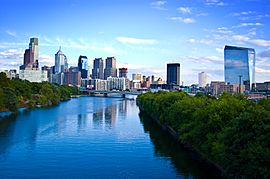 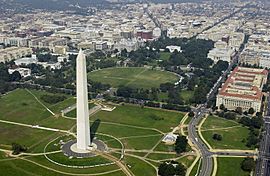 Washington, D.C., the third most populous city in the Northeast and the capital of the United States 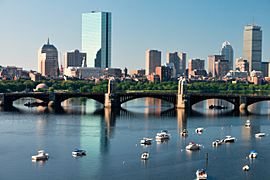 As of the July 2013 U.S. Census Bureau estimate, the population of the region totaled 55,943,073. With an average of 345.5 people per square mile, the Northeast is 2.5 times as densely populated as the second-most dense region, the South. Since the last century, the U.S. population has been shifting away from the Northeast (and Midwest) toward the South and West.

The Nuclear Regulatory Commission oversees 34 nuclear reactors, eight for research or testing and 26 for power production in the Northeastern United States.

New York City, considered a global financial center, is in the Northeast.

The Federal Bureau of Prisons maintains 17 federal prisons and two affiliated private facilities in the region.

The following table includes all eight airports categorized by the FAA as large hubs located in the Northeastern states (New England and Eastern regions):

Almost half of the National Historic Landmarks maintained by the National Park Service are located in the Northeastern United States.

All content from Kiddle encyclopedia articles (including the article images and facts) can be freely used under Attribution-ShareAlike license, unless stated otherwise. Cite this article:
Northeastern United States Facts for Kids. Kiddle Encyclopedia.