Clinton County is a county located in the U.S. state of Pennsylvania. As of the 2010 census, the population was 39,238. Its county seat is Lock Haven. The county was created on June 21, 1839, from parts of Centre and Lycoming Counties. Its name is in honor of the seventh Governor of New York State, DeWitt Clinton, however some sources suggest the namesake is Henry Clinton. 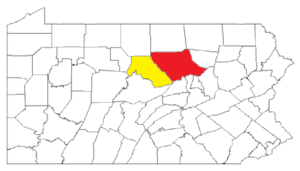 There are five Pennsylvania state parks in Clinton County. 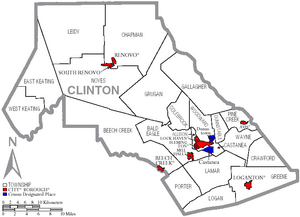 Under Pennsylvania law, there are four types of incorporated municipalities: cities, boroughs, townships, and, in at most two cases, towns. The following cities, boroughs and townships are located in Clinton County:

The population ranking of the following table is based on the 2010 census of Clinton County.

All content from Kiddle encyclopedia articles (including the article images and facts) can be freely used under Attribution-ShareAlike license, unless stated otherwise. Cite this article:
Clinton County, Pennsylvania Facts for Kids. Kiddle Encyclopedia.