Cameron County is a county located in the U.S. state of Pennsylvania. As of the 2010 census, the population was 5,085, making it Pennsylvania's least populous county. Its county seat is Emporium. The county was created on March 29, 1860, from parts of Clinton, Elk, McKean, and Potter Counties. It is named for Senator Simon Cameron.

There are three Pennsylvania state parks that are partly in Cameron County.

The West Creek Rail Trail has been built on the abandoned rail corridor between Emporium and St. Mary's in Elk County. It provides a paved surface with guard rails and is suitable for hiking or biking in the warm seasons or snowmobiling in winter.

The Fred Woods Trail offers a 4.57 mile loop of blazed trail with scenic valley views and a challenging section running through unique rock formations. The trailhead is accessed off Mason Hill Road above Driftwood, PA. 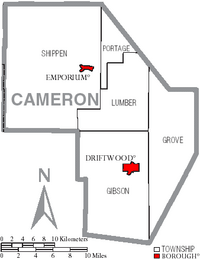 Under Pennsylvania law, there are four types of incorporated municipalities: cities, boroughs, townships, and, in at most two cases, towns. The following boroughs and townships are located in Cameron County:

The population ranking of the following table is based on the 2010 census of Cameron County.

All content from Kiddle encyclopedia articles (including the article images and facts) can be freely used under Attribution-ShareAlike license, unless stated otherwise. Cite this article:
Cameron County, Pennsylvania Facts for Kids. Kiddle Encyclopedia.